Lee Price, a documentary photography based in Manchester, presents The House of King and Queens, a new photography exhibit as part of Hull UK City of Culture 2017’s LGBT 50 programme. The exhibit opens July 27, the 50th anniversary of the Sexual Offences Act 1967. It allows people to see inside the LGBT community of Freetown, Sierra Leone unlike ever before.

Sierra Leone is one of 77 countries in which it is still illegal to engage in homosexual acts. The law is rarely enforced, but that does not keep members of the community safe from harassment and violence.

Within the heart of Leone’s capital, Freetown, exists ‘The House of King and Queens’. Owned by a young transgender woman, members of the LGBT come to this place of comfort and safety.

The sanctuary of Sierra Leone

Commissioned by Hull, the sister city of Sierra Leone, Lee observed the project is ‘a reminder of the progress still to be made with regards to international gay rights’ but also ‘a celebration of the inspiring defiance of oppression and segregation amongst the gay community of Sierra Leone’.

The photos are, without a doubt, beautiful. They are also insightful, offering a look into a community and life of which many people may have little knowledge. It is moving to see a space where the inhabitants can comfortably be themselves. 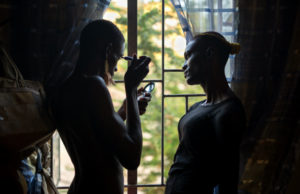 ‘Life is tough for gay people in Sierra Leone and especially those who are transgender,’ said a visitor of the house, who cannot be named for fear of persecution. ‘We face a lot of problems here; transgender people can be flogged in the streets and we don’t feel safe going out after dark in case we are attacked. When ebola came to Sierra Leone it was blamed on gay people. We suffer so much humiliation every day, but I am proud to be gay.’

Perhaps what is so striking about the photographs is that they do not reveal the whole story. They offer a glimpse.

When there is concern about the safety of lives, a level of secrecy is not only understandable but necessary. This look into such a space in the LGBT community is recognized for its significance and gravity.

A need for pride

As a member of this very community, Price’s work often involves groups within the LGBT world. His past projects include Sex with Strangers, documenting gay cruisers, and Against the Order of Nature, showcasing the LGBT community of Uganda.

‘We often hear the question “why does the LGBT community still need Pride,”‘ said Martin Green, Director of Hull 2017. ‘The answer is simple, it’s because there are parts of the world where people are still persecuted for being themselves. Lee Price’s strikingly beautiful, yet thought-provoking photographs show that hope can persevere, even in the face of adversity and I hope that in some small way, they will inspire people to be more supportive of each other closer to home.’

Minister for Women and Equalities Justine Greening further commented: ‘Pride is special, and it’s been fantastic being a part of the celebrations this year. I’m proud to see how far we’ve come as a country in the past 50 years, but there is still more to do. This exhibition is a reminder of the work we still have to do to stamp out bullying and hate crime, which can have such a damaging impact on LGBT people’s lives.’

To find out more about the exhibit and visit it, see its website here.