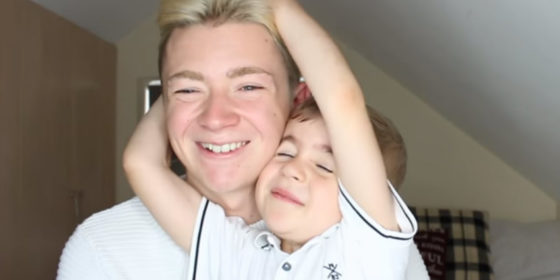 ‘So, how would it make you feel if I married a man?,’ YouTuber OliverVloggs asks his 5-year-old brother in a sweet new video that will definitely tug on your heartstrings. So pull out that tissue box.

Oliver Potter, who boasts 1,700 followers on his OliverVloggs channel, comes out to his younger brother in the video. Viewed over 20,000 times, the video features Oliver and his brother Alfie talking about love.

When Oliver asks Alfie how he would feel if he married a man, Alfie gives the best response: ‘If you marry a man, it’s going to be so cool.’

The brothers talk about babies, how ‘only mummies can make the wish,’ and have an impromptu dance singing ‘you can be what you wanna be, you gotta show love, there’s no room for hate.’ Seated on his brother’s lap, the clear affection between Alfie and Oliver is inspiring and hopeful.

‘Love is love, love is love,’ Alfie says at one point in the video, cuing the waterworks.

‘Since Alfie has known I’m gay he has been as loving as always,’ Oliver said following the video’s filming. ‘He has even been to school and told his friends that his brother would marry a man. They all took it well and think it’s pretty cool which made me smile.’

Understandably nervous to make this video, Oliver now hopes it can encourage others to open up to their own loved ones. While coming out videos are nothing new, seeing positivity and encouragement in stories like Oliver’s can only help the community.

Watch the full video below: