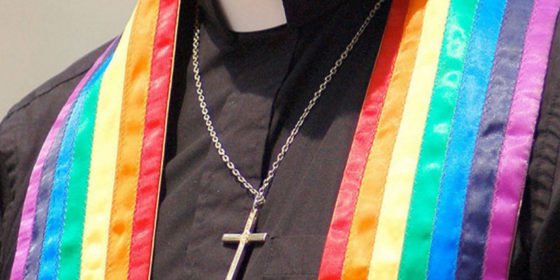 The Church of England’s governing body, the General Synod, voted overwhelmingly in favor of transgender ceremonies marking their new identity after transition.

Reverend Chris Newlands introduced the proposal after consultation with trans members of the church.

After wrapping up the final day of the four day-long General Synod, Chris Newlands introduced the proposal, told Gay Star News: ‘Trans people are wonderfully made and beautifully loved by God.

‘Thank God the church is beginning to accept reality and catch up.

‘Gender dysphoria is real, it matters and we’re going to work with transgender people to support them through all of this.

‘The motion asks the bishops of the Church of England to consider introducing prayers, resources or liturgy to welcome and affirm trans people who want something to mark their transition,’ he said.

Newlands believes it’s a great first step, but there’s still so much more to do. The Church has a ‘bad history’ with trans people.

He purposefully made the proposal simple so that it was achievable.

‘We could’ve done a lot more, but I think this is the first thing to do,’ he said.

Transgender people are not new within the church, explains Newlands.

‘Also, some transitioned and then were ordained and that’s quite significant because it means that the church does recognize trans people enough to ordain them,’ he said.

‘We have to acknowledge there are some churches which haven’t been safe places for trans people to go. There has been so much recorded instances of transphobic abuse.

‘We want to ensure the Church is a place where trans people can go and know they will not be rejected. They will be accepted, welcomed and affirmed for who they are,’ he said.

From here, Newlands says it’s all about creating a ceremony that’s inclusive and welcoming. He will be designing a plan in consultation with the trans community and the Church.

Realistically, he expects a plan in one or two years.

Currently, the Church of England offers civil partnerships, but not same-sex marriages within the church.

Vicars are also allowed to enter into same-sex partnerships, but are expected to remain celibate.

In February this year, the church voted against changing the rules around same-sex marriage.

A total of 242 votes were cast in favor across the three houses, while 184 voted against, and six abstained.

Around 100 members of the House of Clergy voted against it, compared to 93 who voted in favor, while two abstained.

The Church will continue to see marriage as between a man and a woman.