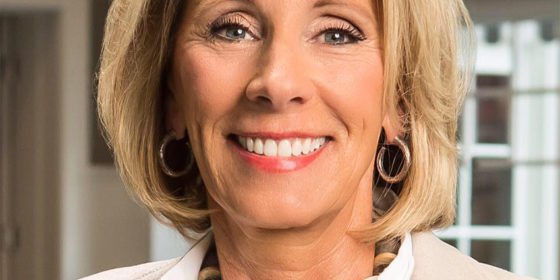 A group of 34 Democratic members of the US Senate are blasting Betsy DeVos on a new detailed letter they hope will get the attention of the US Education Secretary.

The group writes that they are ‘extraordinarily disappointed and alarmed’ by what they see as her department’s efforts to minimize the enforcement of civil rights for students – particularly LGBTI students, according to BuzzFeed.

‘Your testimony in front of Congress, your continued association with groups with records of supporting discrimination, and two memos written by the Acting Assistant Secretary for Civil Rights, have reemphasized longstanding concerns about your dedication to the idea that all students, no matter their race, religion, disability, country of origin, sex, sexual orientation, or gender identity, have a right to receive an education free from discrimination,’ the letter states.

They also call DeVos out for her continued association with the anti-gay hate group Family Research Council.

The letter states: ‘In testimony before the Senate Health, Education, Labor, and Pensions Committee, you attempted to distance yourself from your family’s giving to organizations such as the Family Research Council, which promote intolerant views of lesbian, gay, bisexual, transgender, and gender non-conforming Americans and others. Yet, on June 15, 2017, the Family Research Council participated in an official event on engaging fathers in students’ education at the Department.’

The senators also reiterated their disappointment in DeVos’ decision to rescind federal guidance on protecting the civil rights of transgender students in school.

‘Despite these shocking statistics, on February 22, 2017, the Department withdrew joint guidance on transgender students’ rights under Title IX of the Education Amendments of 1972.’