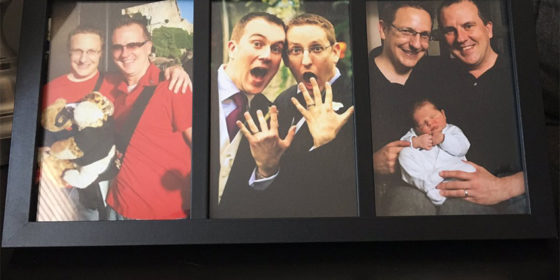 The #relationshipgoals hashtag is common one on social media. It’s often attached to images of couples looking blissfully content with one another.

What are our relationship goals? And is it a good idea to have them? Or do images of seemingly perfect couples on social media have the same effect as filtered images of beautiful bodies: Set unrealistic ideals that most of us can’t help to achieve?

Eric Rosswood is an LGBTI advocate and the author of Journey to Same-Sex Parenthood. A #gayrelationshipgoals photo he recently posted on Twitter went viral.

My husband & I had our 1st date 10 years ago. Just gave him this

marking 3 milestones: 1st trip together, our wedding, & birth of our son. pic.twitter.com/imH43gG802

It showed a present he had given his husband to mark the tenth anniversary of their first date.

The gift was a photo frame with three images – one showing them when they first met, one of them on the day of their marriage, and one with their newborn child.

‘People in general are brainwashed with unrealistic relationship goals’

Would he say he and his partner had firm relationship goals when they first met?

‘We talked about kids on the first date, and knew we both wanted to be parents, but we didn’t rush into anything,’ he explains. ‘Our son was born six years after my husband and I had started dating.’

Although he and his man had some goals when they met, he cautions against mistaking romantic ideals with relationship goals.

‘I think people in general are brainwashed with unrealistic relationship goals. As kids, we’re fed fairy tales that tell us all we need to do is find the perfect guy to marry and all of our problems will be solved. We’ll live happily ever after.

‘But that doesn’t happen. There are ups and downs with every relationship. It’s how you solve problems, and work through issues together as a couple, that matters.’

‘The images associated with “relationship goals” allows us to visualize our best self; in love, being a part of something amazing and living a happily ever after.

‘However, relationship goals and images of what this looks like are not always synonymous. 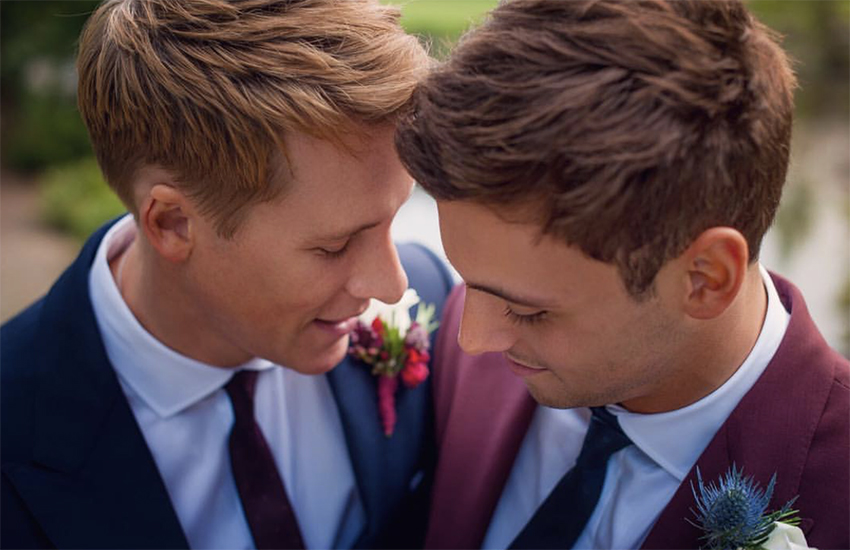 Dustin Lance Black and Tom Daley on their wedding day

‘Goal work helps a couple define and communicate the direction for the relationship. It also opens a space to discuss the less popular task of “taking inventory.”

‘In other words, asking the difficult questions: “What are our goals, where are we today? What does the first step look like and do we have the skills/capacity to take that first step?”

He warns against holding up any image as a constant ideal.

‘Couples must realize such images are only snapshots in time and relationships are constantly flexing, bending and moving. Seeing your relationship as a picture may help with visualizing your future together, but without the work, it can set up unrealistic expectations.’

Working regularly on your goals is advice echoed by San Diego based psychotherapist Michael Dale Kimmel.

‘It’s very helpful to have relationship goals,’ he says. ‘But I think they are most helpful when there are re-examined on a regular basis, rather than being static.

‘What I’ve noticed is that couples change all the time, and if those goals change over time, or adapt and are flexible over time, they can be really helpful.’

He gives an example.

‘I work with a gay couple getting married in a few months, and one of the guys really drank a lot. His partner was really concerned about his drinking, so they had these relationship goals: Ian will not drink more than 4-5 drinks a night when we go out, and if he does we’ll go home.

‘In return, Alan, the boyfriend, will not make a big event of his drinking.

‘Well, two months ago, Ian stopped drinking. So, those goals needed to shift. Alan actually feels he’s kind of boring now. Before, Ian was like the life of the party, but could also tell people off and make people unhappy, so they’ve really had to re-calibrate their relationship. Situations change.

He points out people can lose jobs, and financial goals – such as buying a house together – may have to be adjusted. People can also suffer unforeseen health problems, which may also require goals to change.

‘It’s good to have goals but they need to be flexible and adaptable.’

‘Re-examine goals on a regular basis’

‘My main relationship goal has always been to find someone I can grow with, in a way that makes us both happy without losing ourselves. That goal doesn’t have a finish line because I never want to stop growing as a person or as a couple.

‘Whether it’s buying a house together, having a child together, or helping each other achieve a lifelong dream. There’s always a new experience we can have as a couple to keep things fresh and exciting. So, I haven’t “fulfilled my hopes and goals” so to say. It’s more like I’m living them.’

‘I’ve worked with couples who once a month have a date to discuss how their relationship is going. There are three questions I recommend: What’s going well in our relationship? What’s going not so well? And what would we like to do differently?’

We asked readers for their relationship goals, and you responded in your hundreds.

They ranged from the seemingly simple to the more challenging.

‘I want a man who is playful and outgoing,’ said Stephan Shaw. ‘I want to feel safe with him, to cuddle on the couch in his arms watching Lord of the Rings or just lay on his lap reading a book while he watches what he wants while stroking my hair…. I know that seems way too idealistic but that’s my dream relationship.’

Mark Pointon faced different challenges, saying, ‘My biggest relationship goal right now, is to get my BF out of his home country and to the safety of New Zealand.’

Check out more readers’ responses below and add your own below.