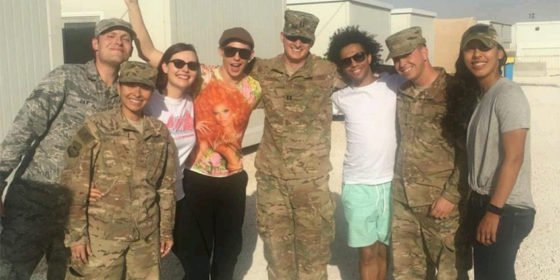 When some right-wing nutjob boasts about ‘real Americans’, he’s often only talking about straight white people living nowhere near a coastline.

And the last thing they would likely be talking about is a couple of drag queens and reality TV stars.

But Alyssa Edwards and Shangela, stars of RuPaul’s Drag Race, have proven how much they love their country by performing for the troops in Jordan.

Amman has a US military base, often used for troops going to Syria, Afghanistan and Iraq, and is a popular destination for US entertainers.

‘We had no idea we have so many Drag Race lovers in Amman!?! Sending u lots and lots of LOVE.

‘Due to our tight schedule (and of course in respect to the observance of Ramadan) we won’t be able to do a public meet-up, however please know that we LOVE you and hope to come back again. Stay Fabulous!! ❤️’

In April last year, Netflix made RuPaul’s Drag Race available in 224 out of the 245 countries the service exists, including in Saudi Arabia.

While homosexuality is legal, Jordan being one of the most progressive Muslim-majority countries in the world, LGBTI people can still be prosecuted for ‘disrupting public morality’.