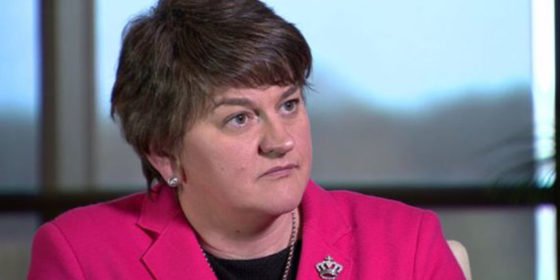 DUP leader Arlene Foster has said even though the party opposes same-sex marriage, it is ‘nonsense’ to call the party homophobic.

In an attempt to fight back over repeated reports over the Northern Ireland right-wing party’s views on social issues, the party hopes to form a deal with the Conservatives.

Foster and Prime Minister Theresa May may work together after Tories failed to win an overall majority in the UK General Election.

Foster told ITV News: ‘There’s been a lot of hyperbole talked about our position to the gay community.

‘Much of it is complete and utter nonsense, I have to say.

‘We take a particular view in relation to the definition of marriage; that does not mean in any one way that we are homophobic.

‘But we’ve been branded in a particular way, which as I say is complete nonsense.’

The Democratic Unionist Party controls the Northern Irish Assembly. Despite the majority of assembly members being in favor of same-sex marriage, the DUP has been successful in blocking same-sex marriage multiple times.

Two same-sex couples are currently taking legal action against the Stormont administration. The case was heard in December and, after months of delays, a judgment should happen this month. However, this is not a short term solution and the case could be dragged on for years.