The recently-concluded JATA Tourism Expo in Japan underlined the importance the Japanese government and tourism leaders put not only on outbound travel, but even more on making Japan a major inbound destination. Leaders mentioned that it wants the JATA Tourism Expo to become one of the world’s most important travel industry events.

For the first time, Japan recognized The LGBT (Lesbian, Gay, Bisexual and Transgender) tourism market for inbound travel to this country. Japan has a vibrant LGBT community, but the travel industry both for inbound and outbound has ignored this market.

A spokesperson for the Hawaii Tourism Authority, an exhibitor, said there was no interest and demand in Japan to justify for Hawaii to reach out to the LGBT community in Japan. Hawaii was in Tokyo attending the JATA Tourism Expo with an emphasis on weddings, but this did not include same-sex weddings.

This may be the typical understanding and has remained an unmentioned potential in Japan and many other Asian countries even with an active LGBT community.

Contrary to Hawaii tourism experts and others surprisingly, the Japan Association of Travel Agents (JATA) held a seminar “Understanding the LGBT Travel Market” at the JATA Tourism Expo Japan 2015 at Tokyo Big Sight for the very first time. It was one of the seminars offered on September 25 for travel trade professionals and media visiting Tourism Expo Japan. 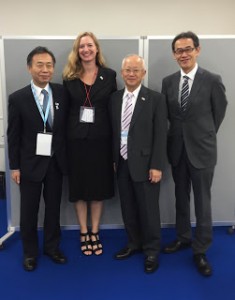 JATA stated: “In Japan, the number of foreign travelers has been increasing rapidly by 30% to 40% each year; in 2015 it will reach 19 million at the urging of the Japanese government’s aggressive measures and policies. Given this situation, JATA recognizes the LGBT potential for the Japanese inbound market and organized this seminar.”

The seminar had the highest number of travel trade professionals in attendance, and the highest media participation of the day, even though hosted media was not told about the event. This showed the high level of interest not only from the tourism industry but also in our society.

One of the local participants mentioned the need for more statistical data in terms of both quantity and quality to make the proper approach to the market. Further effort to understand the LGBT community is certainly necessary.

Scott Foster of LGBT Hawaii said the potential for Hawaii was enormous to look at promoting to LGBT visitors in Asia, specifically from Japan, the number one Asian market for the Aloha State.