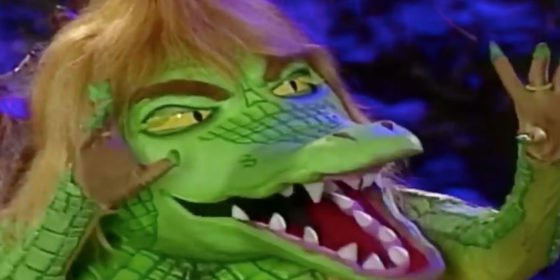 Sassy Brazilian alligator, Cuca, is here to take the throne of gay icon.

Cuca is a character from an old Brazilian television show for kids called Sítio do Picapau Amarelo (Yellow Woodpecker Ranch in English).

The internet is losing its mind over this sassy alligator and her iconic hand gestures, finger clicks and wig.

She originates from a TV adaption of a series of fantasy novels from Brazilian author Monteiro Lobato. The novels follow two kids who go on adventures with their real-life toys.

Cuca is actually a witch, and she first appeared in a chapter of one of the books titled O Saci in 1921.

Before that, the sassy alligator originated in Portugal. She made her way to Brazil in colonial times. Even though the name is a variation of the Portuguese word, Cuca means ‘to swallow something with a single gulp’ in Tupi, an indigenous language of Brazil, Transparent.com wrote.

She is described as ‘arrogant and narcissistic’ and is obsessed with kidnapping and devouring children in the original books. But in the television series, she is portrayed in a less serious light.

Cuca first gained viral traction when a Twitter user posted a gif of her in a Nicki Minaj-style wig with lyrics to Check It Out.

LGBTI people then began to make the meme their own. One user posted a gif of Cuca with a face covering, mocking Valentina’s exit from RuPaul’s Drag Race this season.

cuca this is a lip sync for your life, we need to see your lips pic.twitter.com/0N4ExBSOKA

First Babadook and now Cuca – lets see what the rest of Pride month has in store.

Me annoying my TL with these Cuca gifs pic.twitter.com/NECl0YwIfv

Who is this Cuca and why do I keep seeing her? pic.twitter.com/DBCZLkqcLr