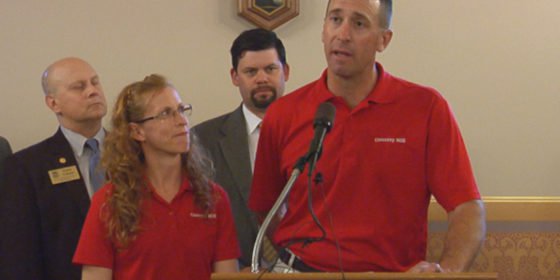 An apple farmer in Michigan is claiming he is banned from selling his fruit at a farmer’s market because of his homophobic religious views.

East Lansing has said farmer Stephen Tennes was not invited to the market because vendors must follow its civil rights ordinance, which bars discrimination.

The farm, 22 miles away from East Lansing, recently announced they would reserve the right to deny gay couples who wished to get married there.

‘It remains our deeply held religious belief that marriage is the union of one man and one woman and Country Mill has the First Amendment Right to express and act upon its beliefs,’ the post said.

‘If the government can shut down a family farmer just because of the religious views he expresses on Facebook … then no American is free,’ said Tennes’ attorney, Kate Anderson, according to AP.

‘Our faith and beliefs on marriage and hosting weddings at our home and in our backyard of our farm have nothing to do with the city of East Lansing,’ Tennes said at a press conference.

‘Nor does it have anything to do with the produce that we sell to the people that attend the farmers markets who are from all backgrounds and all beliefs.’

He added: ‘The government shouldn’t treat some people worse than others simply because they don’t agree with their thoughts or their ideas.’

East Lansing Mayor Mark Meadows said the city’s ordinance applies to Tennes not because of his individual beliefs or Facebook posts, but because of his ‘business decision’ to discriminate.

‘This is about them operating a business that discriminates against LGBT individuals and that’s a whole different issue,’ Meadows said.