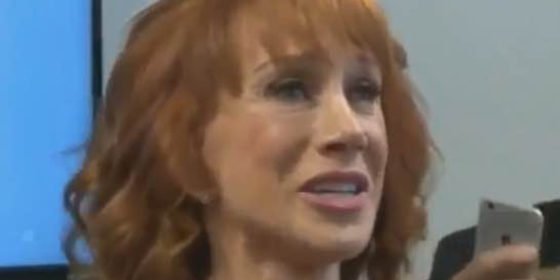 A defiant and emotional Kathy Griffin is speaking out against abuse and death threats she says she’s received for photo she posed for holding a bloody, decapitated head meant to be Donald Trump’s.

‘If you don’t stand up, you get run over,’ Griffin said at a press conference today.

‘What’s happening to me has never happened in this great country. A sitting president of the US … is personally trying to ruin my life forever.’

Griffin apologized the same day the photo was posted online and asked that it be taken down.

But she has still lost jobs because of the backlash including her high-profile gig co-hosting CNN’s New Year’s Eve coverage with Anderson Cooper.

Of the CNN firing she said: ‘It’s hurtful to me. There’s a bunch of old white guys trying to silence me and I’m just here to say that it’s wrong.’

‘I don’t think I will have a career after this,’ Griffin said tearfully. ‘I’m going to be honest. He broke me.’

But she added: ‘I’m not afraid of Donald Trump. He’s a bully. I’ve dealt with older white guys trying to keep me down my whole life, my whole career.’

For more than a decade, Griffin has been one of the most successful stand-up comediennes in the US winning two Emmys and a Grammy and authoring two best-selling memoirs. She also holds the world record for starring in the most stand-up comedy TV specials.

The staunch LGBTI ally is determined to go on.

‘This president, of all people, is going to come after me? He picked the wrong redhead.’ Griffin said.

‘I’m gonna make fun of the president, and you know what? I’m going to make fun of him more now. … I’m not going to be collateral damage for this fool.’

She stands by her apology for the photo which was taken by Tyler Shields and insists it was meant as a parody.

‘I made a horrible, horrible call,’ she said. ‘Trust me, if I could redo the whole thing I’d have a blow up doll and no ketchup.’