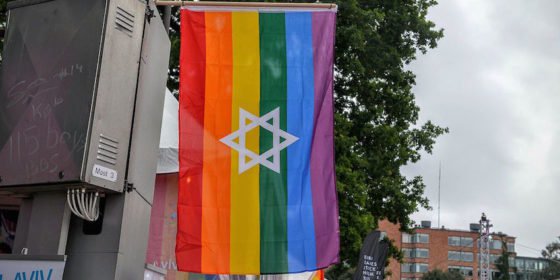 During this year’s annual Dyke March in Chicago, three women carrying a rainbow flag with the Star of David on it were asked to leave.

On 24 June, three lesbian Jews were ejected from the Chicago Dyke March by organizers after complaints that their flag made other attendees feel ‘unsafe.’

At some point during the march, the three Jews were confronted by a group of queer Palestinians with questions about if their flag was an expression of Zionism.

Laurel Grauer, one of the women who were asked to leave, is a member of an organization called A Wider Bridge, which looks to create connections between LGBTI Jews and Israel.

‘It was a flag from my congregation which celebrates my queer, Jewish identity which I have done for over a decade marching in the Dyke March with the same flag,’ Grauer told local paper Windy City Times.

An organizer of the Chicago Dyke March told Windy City Times that the march was ‘anti-Zionist’ and ‘pro-Palestinian,’ which is why the women were asked to leave.

‘They were telling me to leave because my flag was a trigger to people that they found offensive,’ Grauer said.

‘People asked me if I was a Zionist and I said “yes, I do care about the state of Israel but I also believe in a two-state solution and an independent Palestine,”’ she continued.

‘It’s hard to swallow the idea of inclusion when you are excluding people from that. People are saying “You can be gay but not in this way.” We do not feel welcomed. We do not feel included.’

Another woman asked to leave, Eleanor Shoshany-Anderson, is an Iranian Jew. ‘I was here as a proud Jew in all of my identities,’ she said.

‘The Dyke March is supposed to be intersectional. I don’t know why my identity is excluded from that. I felt that, as a Jew, I am not welcome here.’

Shoshany-Anderson wrote a more in-depth statement about what happened on the blog Jewish Philosophy Place:

‘I wanted to be in public as a gay Jew of Persian and German heritage. Nothing more, nothing less. So I made a shirt that said “Proud Jewish Dyke” and hoisted a big Jewish Pride flag — a rainbow flag with a Star of David in the center, the centuries-old symbol of the Jewish people.’

‘During the picnic in the park, organizers in their official t-shirts began whispering and pointing at me and soon, a delegation came over, announcing they’d been sent by the organizers. They told me my choices were to roll up my Jewish Pride flag or leave. The Star of David makes it look too much like the Israeli flag, they said, and it triggers people and makes them feel unsafe. This was their complaint.’

‘I tried to explain — no, no! It’s the ubiquitous symbol of Judaism. I just want to be Jewish in public. No luck. So I tried using their language. This is an intersectional march, I said. This is my intersection. I’m supposed to be able to celebrate it here. No, they said. People feel unsafe. I tried again to explain about the Star of David. I tried again to use their language, to tell them that not being able to be visibly, flagrantly, proudly Jewish on my terms makes *me* feel unsafe.’

The Chicago Dyke March has issued official statements explaining and standing by their decision:

‘Upon arrival at the rally location in Piotrowski Park, Palestinian marchers approached those carrying the flags to learn more about their intentions, due to its similarity to the Israeli flag and the flag’s long history of use in Pinkwashing efforts. During the conversation, the individuals asserted their Zionist stance and support for Israel. At this point, Jewish allies and Dyke March organizers stepped in to help explain why Zionism was unacceptable at the march.

There was an earnest attempt at engagement with these marchers, and the decision to ask them to leave was not made abruptly nor arbitrarily. Throughout a two-hour conversation, the individuals were told that the march was explicitly anti-Zionist, and that if they were not okay with that, they should leave.

Zionism is an inherently white-supremacist ideology. It is based on the premise that Jewish people have a God-given entitlement to the lands of historic Palestine and the surrounding areas. This ideology has been used to justify dozens of laws that discriminate against Palestinian citizens of Israel, segregated road systems in the West Bank, and forced removal of Palestinian families from their homes in order to make way for Jewish-only housing, among other violent and discriminatory practices.

We recognize that Zionism is not synonymous with Judaism, but instead represents an ideology that uses legacies of Jewish struggle to justify violence.’

Their statement references the idea of pinkwashing, which is used to mean that Israel only appears to be LGBTI friendly in order to distract from their human rights violations.

Grauer told the following to Dana Beyer, a contributor at Huffington Post:

‘For over ten years, I have marched in Dyke March, carrying this same flag, without incident. This flag, I received from my congregation, Congregation Or Chadash, which was founded over 42 years ago when the Jewish community still closed its doors to Gay, Lesbian, Bisexual, and Transgender Jews.

While there is always work to be done as far as including and empowering LGBTQ Jews within Jewish spaces, the community as a whole has come a long, long way. In part, by carrying this flag, it has allowed me to show the pride I carry for me and my identities, as well as my communities. “That may be what the flag means to you, but other people find it offensive. This march is a private event and you are offending the organizers of this event.”’

While many organizations including Jewish Voices For Peace – Chicago, For The People Artists Collective, Black and Brown Punk Show Collective, Black and Pink Chicago, Fed Up Fest Chicago, NYC Queers Against Israeli Apartheid, Toronto Queer Film Festival, and If Not Now – Chicago have issued statements of support and solidarity with the Chicago Dyke March, other LGBTI people are avidly against what took place.

Some groups who have come out against the Chicago Dyke March’s decision include Lamda Legal, Equality Illinois, Human Rights Campaign, the Anti-Defamation League, the American Jewish Committee, among others.

People also took to social media to express their outrage.

This Facebook post shows a Muslim LGBTI person with their version of a Pride flag, featuring the Islamic star and crescent symbol. As the poster points out, that symbol is used on the flags on Muslim-majority nations like Turkey and Pakistan who are notoriously anti-LGBTI.

Curious that at the Chicago Dyke March Jewish and American flags were banned but flags from countries that imprison and kill gays were not.

real hard to stay an active part of the left when you get told that Jewish symbols are triggering and offensive! thx Chicago dyke march!

To my cishet Jewish friends: pls leave space for queer Jews to talk abt the Chicago Dyke March. Our intersectional experience is important

Don’t get me wrong. I’m anti-Israeli regime, pro-Palestinian, pro-2state, etc. But what Chicago Dyke March organizers did was unjustifiable.

Stephanie Goldfarb, a social worker with the Jewish Federation of Metropolitan Chicago, has noticed the rising trend of anti-Semitic language in liberal spaces, including on the Chicago Dyke March’s social media pages.

‘There are a lot of people on left who don’t realize it is anti-Semitic to tell someone that they’re supporting genocide by supporting a Jewish ritual object,’ she said.

A change.org petition urging the organizers of the Chicago Dyke March to apologize to the Jewish LGBTI community has reached over 11,000 signatures.