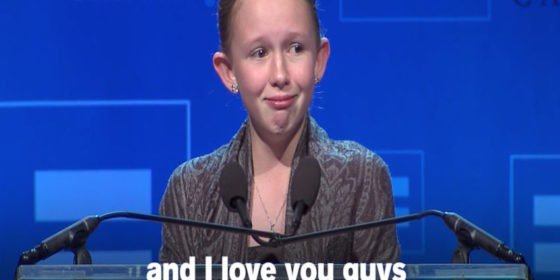 Earlier this month, Savannah, a 12-year-old Mormon girl from Utah gave a heartfelt speech to her church.

‘I believe I was made the way I am, all parts of me, because of my heavenly parents,’ she said.

The video of her testimony went viral. And now, Human Rights Campaign (HRC) has honored young Savannah for her bravery.

HRC Utah invited Savannah to its gala in Salt Lake City, where she was met with tons of applause from over 650 attendees.

‘We have a message for you,’ event chair Dustin Williams told Savannah, who was accompanied by her supportive parents.

‘That we love you, that we’re proud of you. We want you to keep being yourself and don’t let anyone stop you.’

Savannah, choking back tears, took the mic to say, ‘even though I’m small, and I don’t really have a video to go with what I’m saying, I have a lot of love to share—I love you guys so much.’

Watch the touching moment below: