‘So I got upset, angry and fell in love,’ he told PinkNews.

Freddi asked producers if he could shoot a scene with Leguizamon and a month later, it happened.

But the night before their first big scene together, they slept together offscreen, where the chemistry was undeniable.

Then on 9 February this year, Freddi asked Leguizamon to marry him.

Freddi settled back into a ‘normal’ life and became a math lecturer at La Sapienza University in Rome.

Then seven months on, the couple tied the knot in a civil partnership ceremony broadcast via Channel 5 – the most popular television station in Italy. It took place at the lavish Villa Miani in Rome.

While same-sex marriage is not yet legal in Italy, civil partnership ceremonies offer LGBTI couples much the same rights as marriage.

Civil partnerships are open to both same-sex and opposite-sex couples in Italy and both gay and straight people regard them equally.

The celebrant for the ceremony was Vladimir Luxuria, a transgender former member of the Italian Parliament, actress and TV host. She was also the first transgender MP in Europe.

Speaking to Gay Star News, Freddi said: ‘I am so happy, it was an incredibly perfect day.’

Freddi thanked friends and family for all of their love and support, but also people on social media for their congratulations. 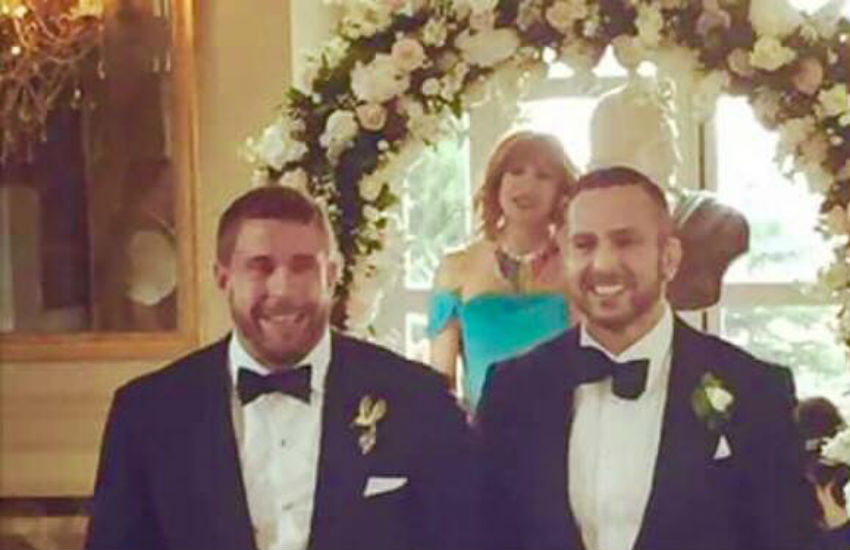 ‘Deciding to have such a public wedding was not an easy decision,’ Freddi said. ‘But we are aware that being gay is not as easy as it is for us for everybody.

‘Having a public event meant to bring a ray of light into the darkens of some social layers who still suffer coping with the acceptation of homosexuality,’ he said.

Freddi said: ‘We both hope that showing wedding like ours will help to make people understand that gay weddings are a new social reality and this is the new normality.

‘We hope to be of inspiration and of support for all those young gay people who believe their family will never accept them.

On their advice to young gay people who think they may never find love, Freddi said: ‘You are not alone, one day you will have a beautiful wedding and an amazing life companion.’

He then added: ‘Love wins.’