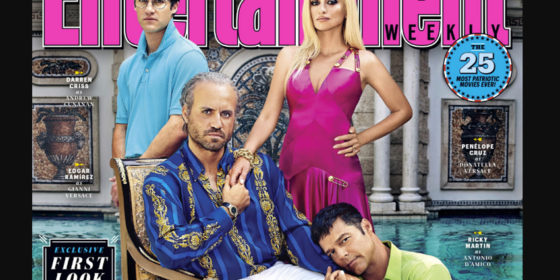 The lover of murdered fashion icon Gianni Versace has criticized Ricky Martin’s portrayal of him in American Crime Story.

‘The picture of Ricky Martin holding the body in his arms is ridiculous,’ D’Amico says in his interview with The Observer this week.

He added: ‘Maybe it’s the director’s poetic licence, but that is not how I reacted.’

He goes on to liken the set up to Michelangelo’s Pieta. The famous scene shows Jesus in the arms of his mother after his crucifixion.

The report also clarifies that D’Amico has not been consulted about The Assassination Of Gianni Versace: American Crime Story.

Versace was murdered in his Miami Beach home by serial killer Andrew Cunanan in 1997.

D’Amico furthermore added: ‘There has been so much written and said about the murder, and thousands of suppositions, but not a trace of reality.’

American Crime Story is of course an offshoot of the wildly popular American Horror Story. The second season will focus on the events leading up to Versace’s death.

It also stars Édgar Ramírez as Versace and Penelope Cruz as Donatella Versace.

‘I felt as if my blood had turned to ice’

In the same interview, D’Amico did say he would offer Ricky a helping hand with the TV show, which is airing in 2018, if he wanted it.

‘It’s getting to know the small things about a relationship,’ he explains. ‘For example, Gianni was so ordered and focused at work but in his private life everything was disorganised. He’d leave the bathroom in a mess. At a certain point I said “enough”! And when it came to cooking, he didn’t even know how to [boil] an egg.’

Reliving the murder, D’Amico said his ‘blood turned to ice’ when he heard the gunshots, adding that he still mourns for the style icon today.

‘Sincerely, after two decades, I will always be connected to Gianni as a person I loved for more than 15 years,’ he said. ‘But today, I am a different person. The world continues to go around.’