Transgender Day of Remembrance (TDOR) is an annual observance on November 20 that honors the memory of people who were killed in acts of anti-transgender violence. The event is held in November to honor Rita Hester, whose murder on November 28th, 1998 kicked off the “Remembering Our Dead” web project and a San Francisco candlelight vigil in 1999.

This statistics continue to be staggering; 2016 was the deadliest year on record. In the first ten months of 2017, at least 23 transgender people have been killed in reported homicides. Anti-transgender violence is a fact of life and it disproportionately impacts transgender women and people of color, especially transgender women of color.

This year, as you honor those we’ve lost and resolve to make our country a safer place to be an out transgender person, take time to honor all of the transgender people alive and thriving. This election cycle brought incredible stories of transgender people running for office and winning in their home communities. Danica Roem’s story stands out in particular. She was elected to the Virginia House of Delegates, ousting Bob Marshall who pushed for anti-transgender bathroom legislation in Virginia. 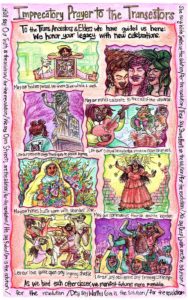 We look to our partners at Forward Together, who have been working in partnership with Audre Lorde Project and artists of all kinds since 2014, to imagine honoring of transgender people in a way. Transgender Day of Resilience is about “honor[ing] the resilience and power of our living trans family.” In their own words, “10 trans, gender nonconforming and non-binary artists of color created visions of a world beyond fear and violence.” This vision of trans futures is vital in the face of such overwhelming violence. Whether at the polls against the fifteen bathroom bans we saw tank this legislative session or in our daily lives, we must work to ensure that transgender lives — especially the lives of transgender women of color — are valued in all the communities we call home.

Mel King is the Development and Operations Manager for Equality Federation, the national strategic partner to state-based organizations working to win equality in the communities we call home. In this role, he manages the individual giving program and the donor database, as well as operations for the communications department and internal systems. He also serves as the board liaison.