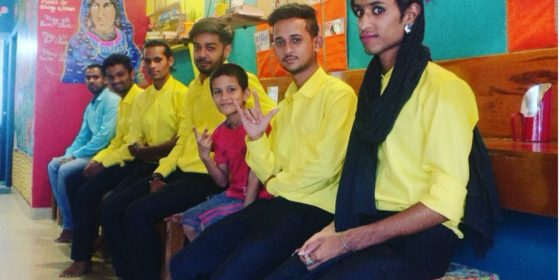 A cafe in India is winning rave reviews, not just for its menu but also for its hiring policy.

The Nukkad Teafe only hires trans people and people with visual or speech impairments.

Found in Bhilai, a major city in the central-west Indian state, Chhattisgarh, the cafe also has a strict no phone policy. Visitors are asked to leave their phones and engage in face-to-face conversation with their friends. People who agree to leave their phones to the side even get a 10% discount on their final bill.

Customers can also have the chance to learn sign language at the cafe, with the menu designed so that the items can be spelled using sign language.

Priyank Patel opened the cafe after spending years working at NGOs where he learnt it was important to help people become self-reliant according to a report in the Indian Express.

Since 2013, Patel has been opening Nukkad Teafe branches around the state where he wanted people to meet in a safe space.

He described Nukkad Teafe as ‘not just another cafe instead it is a social experiment of generosity’.

Point noted. Thank you so much for loving and experiencing Nukkad your favourite Chai cafe. #chai #service #nukkadTeafe #service #hospitality

The Nukkad Teafe cafes host ongoing initiatives such as the Bill by Dil day, where people can pay as little or much for their food and drinks. Tea and Tones is another initiative at the Nukkad Teafe that lets people recite their poetry on a small stage.

And if that’s not enough, the Gyaan Daan is a library where people can donate and borrow books to take home for five days.

Apart from this social cause, they also have incorporated some other initiatives. While the Digital Detox initiative that lets one avail discounts by keeping phones away, there are others like Gyaan Daan, Bill by Dil, Tea and Tones, etc.