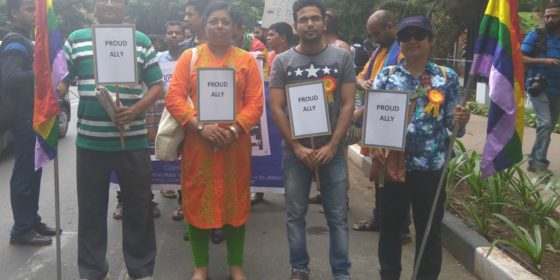 The recent Pune Pride march in India was widely celebrated as a successful event, raising the visibility of the city’s LGBTI community.

Pune is a major city in the western Indian state of Maharashtra.

But the lead up to last weekend’s event was marred in controversy as organizers told marchers to only wear ‘decent clothes’. Local organization the Samapathik Trust runs the event and asked people to adhere to is requests.

Organizers shared the below list of what was acceptable to wear and also bring to the Pride march:

Not long after the list was released it created a ‘brouhaha’ with people in distinct camps of support. Soon the hashtags #BoycottPunePride and #ISupportPunePride popped up on social media.

‘A pride march is supposed to be that all welcoming place where people can be themselves without any kind of policing of their bodies and choices,’ wrote Gaylaxy’s editor, Sukdheep Singh.

‘If pride organisers themselves start putting restrictions on what one can wear to a pride march, and start  banning ‘flamboyance’ and calling for ‘decently dressed people only’ where do all the non-conforming and flaming homosexuals go then?

‘Are we so ashamed of our not-so-straight-acting LGBTQ members that we need to police their choices and dress at pride march?’

Singh congratulated Samapathik Trust on its hard work but criticized its ongoing restrictions on how people dress and behave at Pride marches.

‘No one is trying to under-estimate the work that Samapathik Trust has done in Pune till now, yet one would concede that the way the organisation has gone on to put restrictions on the marchers shows a very flawed understanding of what Pride is,’ he said.

‘Pride Marches across various cities in India as well as the World are increasingly talking about intersectionality for a reason.

‘Queer people undergo enough repression in their daily lives by straight people, society, government and police, let them not face more repression and policing of their bodies and desires at pride marches.’

Bindumadhav Khire, president of Samapathik Trust admitted the Pune Pride is a conservative one.

‘Our pride march is a low-key and conservative one, and we’re extremely proud of it,’ he told Times of India.

The Trust said the weekend’s march was the biggest Pride March ever in Pune. Khire also reacted online to criticism of the Trust’s guidelines.

‘I stand by me decision,’ he wrote on Facebook.

‘I am the one giving the undertaking to the police and taking a risk! Why don’t your organize your own pride and do your own nanga naach by giving your own undertaking… this pride walk will be better off without such hatemongers.’

‘Many people came forward to march for inclusivity and express their identity,’ he told Times of India.

‘This is wonderful, because we’ve always heard that Pune is conservative in terms of acceptance. I also don’t think there was any restriction by the organisers on flamboyance; participants were just asked to stay within limits. Still, the march turned out to be colourful.’