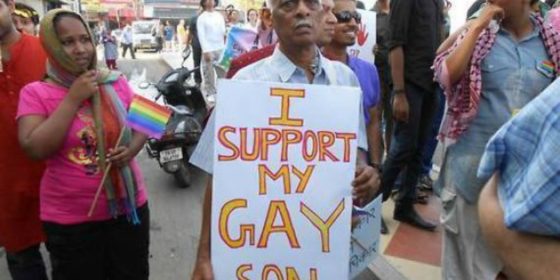 An Indian TV news network is in hot water for using a photoshopped image that turned a Pride event placard into a message of protest.

News18 was covering a news story about protestors in the Uttar Pradesh city, Lucknow. The protestors were unhappy that IT company, Tata Consultancy Services (TCS), was closing its centre in Lucknow. TCS wants its workers to relocate.

Opindia reported that News18 showed the below image of an older man holding a placard allegedly protesting the centre’s closure. The placard urges the state’s Chief Minister Yogi to convince TCS to leave its centre open and let his son remain with him in Lucknow. 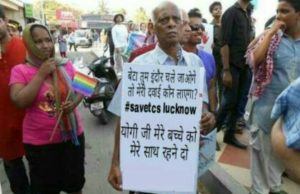 The photoshopped image of a man in Lucknow. Photo: Opindia[/caption]

But one of Opindia’s readers investigated and found the original image was from a Pride event in 2012. Rajdendra Singh Chhabra found out the photo was originally posted on Reddit.

The man had originally posed with the placard reading ‘I support my gay son’ at the parade in Chennai at the other end of India.

A lady is also seen to be holding a rainbow flag behind the man with placard, another give away that they were likely at an LGBTI-themed event.

It is not know whether the News-18 photoshopped the image themselves, or acquired the already doctored image from somewhere else. 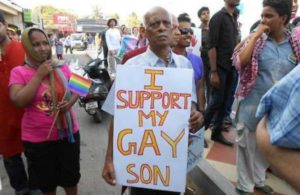 The original photo of a proud dad at a pride event in Chennai. Photo: Reddit