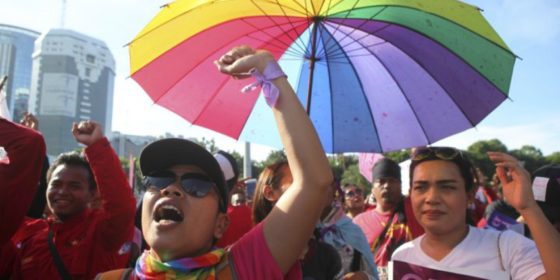 A human rights group has written to the head of Indonesia’s national police force calling on him to stop the targeting of LGBTI people by police.

Human Rights Watch wrote to the police chief General Tito Karnavian asking him to investigate recent raids of gatherings of gay men in Surabaya and Jakarta.

‘The national police need to stop these raids to restore public confidence that the police will do their duty to protect all Indonesians.’

In the past month police raided seperate events in Surabaya and Jakarta, detaining men and releasing their photos publicly before they were even arrested. Late in May the West Java police chief announced his province created a special unit to investigate and monitor LGBTI people.

The men were detained under Indonesia’s 2008 anti-pornography law, which is discriminatory in content as it specifically includes ‘lesbian sex’ and ‘male homosexual sex’ as ‘deviant sexual acts’, alongside sex with corpses and sex with animals.

HRW said the law contravenes international human rights law applicable to Indonesia, because it discriminates against gay men and lesbians.

‘The police must act [to protect them],’ Jokowi told the BBC. ‘There should be no discrimination against anyone.’

The HRW said it was time Jokowi backed up his public statements.

‘The police’s use of a discriminatory so-called anti-pornography law as a pretext to raid private gatherings exposes the crude bigotry of their actions,’ Adams said.

‘President Jokowi put the police on notice about protecting LGBT people. Now he needs to make sure they act on it.’