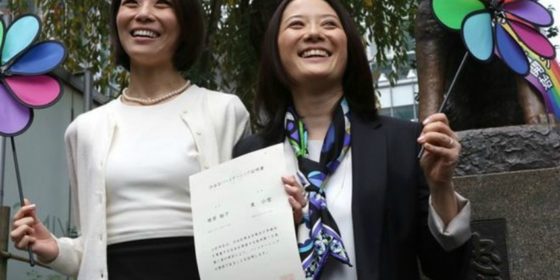 It was announced in February that Sapporo would recognize same-sex partnerships and on Thursday started issuing its first certificates.

A 32-year-old woman said she was delighted once she received her certificated with her partner.

‘I was finally able to do it. It may be self-satisfaction but I want other people to use the system without caring what people around them think, because they can become happy,’ she told the Japan Times.

In order to obtain a partnership certificate, applicants need to be residents of Sapporo and over the age of 20.

When they sign their ‘partnership vow’, couples receive their certificate which allow them some concessions as a couple but are not the equivalent legal recognition of a heterosexual marriage.

Either or both partners must also say they are ‘sexual minorities who recognize each other as a life partner and promise to cooperate with each other economically, physically and mentally in their daily life’.

Watch the video of some of the first certificates issued