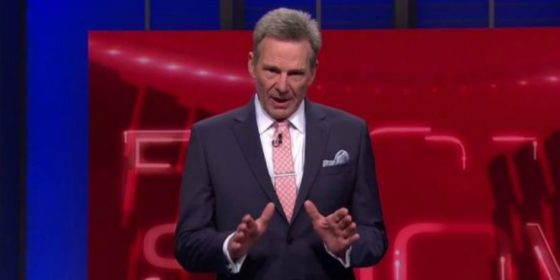 A TV personality has given an apology for making transphobic comments about Caitlyn Jenner.

Sam Newman is one of Australia’s most recognized TV hosts on Melbourne’s The Footy Show program. The show is dedicated to Australian Rules Football (AFL).

He went on a bizarre rant last week after a football club’s supporters said he looked like Caitlyn Jenner.

‘Is it transgender is it, or what is it?’

It didn’t take long for social media, the LGBTI community and allies to condemn his comments. The issue was trending on Twitter and people were calling for Newman to be stood down.

But after pressure from the public and meeting with some advocates, Newman apologized on last night’s Footy Show.

‘I’ve taken a bit of a belting this week for some inappropriate pronouns I used when speaking about Caitlyn Jenner,’ he said.

‘I’ve apologised for that and am doing it again – I remember Caitlyn Jenner as Bruce Jenner who won an Olympic gold medal as a male, and I was searching for the clinical term to call her.

‘I wasn’t sure whether she as a male was still complete or as a woman was not complete – I’m not advised that that makes no difference at all.

‘If you wish to declare yourself a woman, if you’re a man, or vice versa, that’s all that matters, I take that on advisement.

‘I can’t apologise any more for the remark I made. I know I’m a Luddite and a dinosaur and from a different generation, so I’m now enlightened. If something good has come of it it’s that I’m now more enlightened.’

So close, but so far

But later in the show Newman took a swipe at a footballer who had called him ‘irrelevant’.

Speaking on Australian radio, Patrick Dangerfield who plays for the Geelong Cats, said Newman had a long history with controversy.

‘The show itself, apart from Bec (co-host Rebecca Maddern), who is wonderful, I haven’t watched it for a while now and I just think Sam was well off the mark and well out of line,’ Dangerfield said on KIIS radio.

Newman was having none of Dangerfield’s criticism despite having earlier apologised. He then accused Dangerfield of being ageist and sexist.

‘If you want to have a go at me or say something to me, come and sit on that desk there and do it to my face,’ he said on the show.

‘Pat, please, if you’re going to have a go at me for not understanding the era of political correctness we live in, don’t call me old. I don’t mind if you call me old but that is an ageist comment and it reflects badly on people in the workforce who are my age.

‘You said the only person you watch the show for is this woman here (Maddern). That is sexist in itself.

‘Let’s be consistent, instead of coming on here like a perfume dwarf and thinking that if you act like a ventriloquist’s dummy that will cut the mustard here, it won’t.’