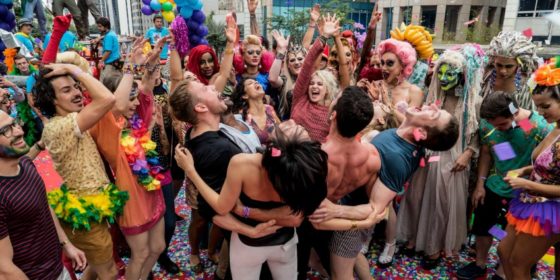 Fans still reeling from the cancellation of Netflix’s Sense8 are rejoicing at the news of a 2-hour finale in the works.

Created by sisters Lilly and Lana Wachowski – the directors behind the Matrix trilogy – Sense8 was axed after only two seasons earlier this month.

Sense8 is about eight complete strangers who are scattered across the globe but find themselves mentally, emotionally and spiritually connected.

Lana posted a letter on Facebook instructing fans to ‘tell your cluster’ that the show will come back for one last hurrah in 2018.

In the letter Lana said she was very moved by the outpouring of grief from fans who were devastated at the show’s cancellation. Some fans even started a petition to convince Netflix to get the show back on air.

But it turned out it was the impassioned response from fans that convinced Netflix to give it one last episode.

‘The passionate letters, the petitions, the collective voice that rose up like the fist of Sun to fight for this show was beyond what anyone was expecting,’ Lana wrote in the letter.

‘Improbably, unforeseeably, your love has brought Sense8 back to life. (I could kiss every single one of you!).’

Lana confirmed a two-hour special would air in 2018. She even suggested it may lead on to another chance for the show.

‘After that… if this experience has taught me anything, you NEVER know,’ she wrote.