Netta is representing Israel at this year’s Eurovision Song Contest.

The song, Toy, wowed audiences across the world and Europe who gave it a total of 529 points in a nail-biting finale.

After a mixed judging round, juries around the world left Israel, Cyprus, Germany and Sweden and Austria in the running.

‘Thank you so much for embracing difference and diversity – next time Jeralusm.’

In a very tight public voting round, with extraordinary differences between the jury and public, Cyprus and Israel were left down to the wire.

But despite Cyprus also going into the event highly tipped to take the crown, Israel won. The country nearly left the competition last year.

The victory came after a controversy during the UK performance.

A man ran on stage and stole the microphone, followed shortly by several security guards. He was swiftly pulled away and later taken into police custody.

A Gay Star News source at the event says the protester managed to say: ‘For the Nazis of the UK media we want freedom.’ The protester’s comments were mostly inaudible when broadcast.

SuRie whose song ‘Storm’ carries the lyrics ‘I still believe in chasing rainbows,’ continued moments later. She declined the chance to perform again.

The festival is the biggest global event that isn’t related to sports.

It was hosted in Portugal this year after they won the right to host the contest with Salvador Sobral’s winning song ‘Amar Pelos Dois’ in the 2017 edition in Kyiv.

The evening saw the 1,500th song performed at Eurovision.

Even Vanjie made an appearance

For those who don’t understand why Rylan kept dropping the V bomb; the tenth series of Drag Race featured perhaps the biggest pop culture reference to come from the show thanks to contestant Vanessa Vanjie Mateo.

Spolier: She was kicked out at the end of the episode one – but not before leaving a legacy from one indescribable moment.

And as Rylan is a massive Ru Paul superfan – it came up a lot this year during the commentary this year.

Eurovision banned the airing of this year’s final in China after it censored several moments in the semi-final including, LGBTI content.

The singing competition blocked China’s Mango TV from airing the second semi-final after it did not air Ireland’s performance. The song by Ryan O’Shaughnessy featured two male dancers acting out a romantic storyline.

Mango TV also blurred rainbow flags in the crowd and the tattoos of Albanian performers.

A spokesperson from the European Broadcasting Union said:

‘This is not in line with the EBU’s values of universality and inclusivity and our proud tradition of celebrating diversity through music.’

The Irish entry really got our queer cute aggression raging– with an adorable male duo dancing on stage together in the snow.

‘I’d like to welcome the decision by the EBU to do that because from the very start we’ve said love is love – doesn’t matter whether it’s between two guys, two girls or a guy and a girl so I think this is a really important decision by the EBU and they haven’t taken this lightly and I think it’s a move in the right direction so I’m happy about it.

They were the only country to do so, despite rumors that Russia may also not broadcast the gay dancers because of their anti-gay propaganda laws. When Russia read out their votes during the judging, the arena booed all the way through. They did not compete in the final this year. 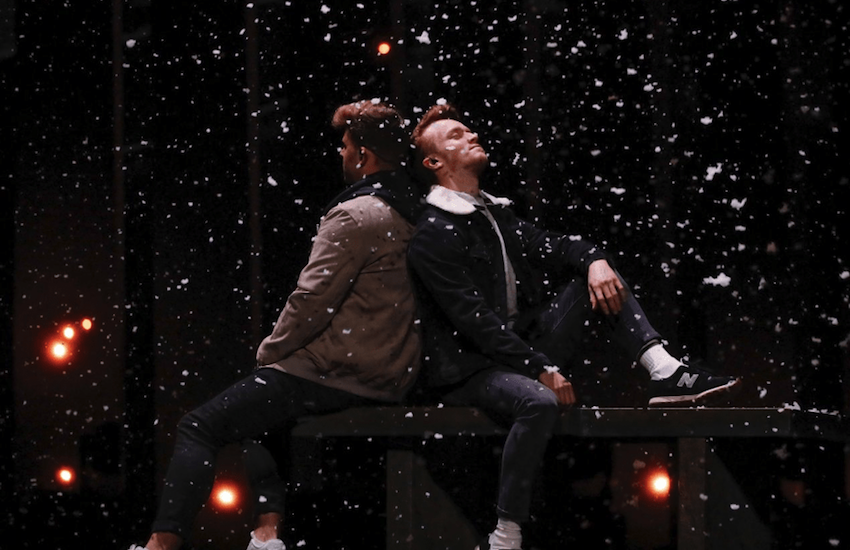 Other LGBTI songs that didn’t win this year

Israel’s entry had captured the LGBTI communities heart, at least in Europe. OUTTv’s Eurovision poll put them at the top of the ranking. For the past nine years, the poll has had a strong run of picking the top three songs accurately.

Netta’s song, Toy, was a hot favorite for a while to win next weekend’s competition. It garnered 18 million YouTube views in the month since it was uploaded to the official Eurovision channel.

Toy’s song was one of a number written by gay composers this year. And it’s not been without its controversy.

Many have questioned whether using a loop station is allowed in the official rulebook. In the rules, no recorded vocals are allowed to be played in the backing track.

However, Toy uses a loop station with music only created on the stage. Therefore, an official said this was not against the rules.

UK X Factor runner-up and lesbian Saara Aalto Finnish singer’s song also has help from fellow members of the LGBTI community. Aalto’s song Monster is the first Finnish entry to make it to the final in four years.

She has been working with gay X-Factor choreographer Brian Friedman.

Aalto’s song came BLA, with THIS MANY POINTS.