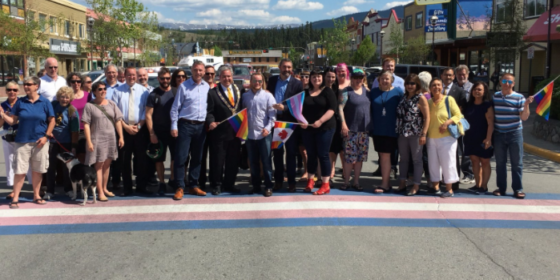 If there is anything the world needs more of, it is trans crosswalks.

When Lethbridge in Alberta, Canada appeared to be the first city in the world, it turns out Whitehorse, a city in the territory of Yukon in northern Canada had beat them to it by a day to create the world’s first crosswalk painted with a trans flag.

Speaking to Gay Star News, All Gender Yukon’s Chase Blodgett explained: ‘This city of Whitehorse is the first in the world to lay a transgender crosswalk flag.

‘This was not something we declared loudly at the time, as we felt humbled and proud of our loving, inclusive community. In light of recent media we feel it is important the recorded history reflect accuracy.’

‘More importantly, the world had no transgender flag crosswalks. Within a 24 hour time period it had two both within Canada. We are so very proud to be Canadian in a country that values the diversity of citizens and in two separate jurisdictions, boldly declared that one of the most marginalized groups in our society, is welcome.’

Blodgett added: ‘Mayor Dan Curtis and I were talking [about the idea] at Pride 2016. The trans, two-spirit and non-binary community as struggling.

‘The Yukon Party had been in power for 14 years. Many members had human rights rights complaints and civil litigation as great personal and emotional toll. The mayor and I were in it it from the beginning.’

The idea was kept a secret from the public in attempt to unveil it as a complete surprise.

‘We didn’t tell other members of the Pride organizing committee or community,’ Blodgett said.

‘We met quietly with Dan Curtis, drew up plans for the engineers, provided photos of trans and rainbow flags, and the city ordered paint.’

City Council meetings in Yukon are public record and so after the project was brought to them for a vote, a journalist began calling for more information. They managed to avoid  having to divulge details however because they ‘pulled out of a scheduled interview with 15 minutes notice, because both the City and Yukon Pride and All Genders Yukon agreed that we wanted an unveiling’.

Despite the trans flag crosswalk in Alberta not being the first and still getting the publicity for being the first, All Genders Yukon do not regret ‘how this went down’.

It was difficult to keep the trans crosswalk secret

‘There was a buzz in the air as word of mouth spread rapidly, folks came down to the sidewalks to take photos and share the lovely surprise,’ Blodgett added.

‘It is very difficult to keep things secret in Yukon because of our small population. It’s a simple as one of the people on the night crew painting tells a member of the LGBTQ2+ community what they are about to doing. Within 48 hours every queer person in town knows.’

What an honour today to celebrate the first #transgender flag sidewalk in both #Whitehorse and #Canada! #pride #LGBTPrideMonth pic.twitter.com/Wumg9J7Foy

The turn out for the unveiling included a minister from the local church, local politician Premier of Yukon Sandy Silver, representative from First Nations and ‘many city councilors’.

As well as having the worlds first trans flag crosswalk, The Yukon territorial government passed the city’s Yukon Human Rights Act. The law will ban discrimination on the basis of gender identity and expression. They also changed rules so trans, two-spirit and non-binary people can amend their certificates without surgery.