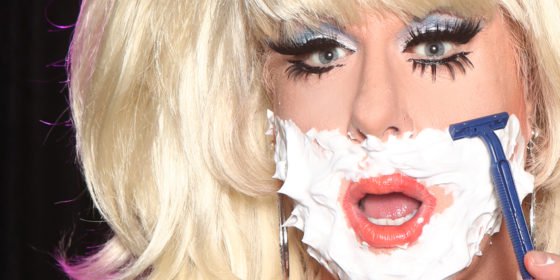 Lady Bunny is one of the world’s biggest and best-loved drag queens. She’s been entertaining audiences since the early 80s, and even presided over her own mini-festival: Wigstock!

The New Yorker is currently in London for a residency at the Soho Theatre. She’s in Europe with her show Trans-Jester: a comical and uncompromising confrontation of political correctness prompted by her experiences performing to LGBTI audiences around the world.

Talking to GSN, she said, ‘I came up with the idea for the show because I was seeing a wedge driven between the drag and the trans community.

‘It has been my experience, and we’re talking years of experience, the drag and the trans were always the closest, so I don’t know what has happened, whether it’s an obsession over language.

‘Some would say I should not even call the show “Trans-Jester” … actually, trans is a prefix, like transportation, transvestite … that is something I can use without people saying it’s a slur. But people are walking on eggshells!’

Watch the interview below.

Infighting in the LGBTI community is something Lady Bunny feels strongly about. She yesterday posted a statement to Facebook that has been shared hundreds of times and reached thousands.

‘Let’s fight over the correct terms for everybody. Let’s dismiss everyone who doesn’t want to transition as a privileged cisgender. Let’s spar over the name of our own damn community – is it gay, LGBT, LGBTQ, LGBTQIA or did we bring back two spirits yet? I also saw a Y in there recently and have no idea what that even is.’

Part of the reason that infighting upsets her is the impact it can have on young people just coming out.

‘In our supreme jadedness of which I am also guilty, let’s try and remember that there are young members of our own tribe who have gotten nothing but soul-destroying messages from their schoolmates, their churches and even from their families. Do they need our help?

‘They need to see large groups of their own tribe in a festive environment so that they don’t feel so alone.

‘They need to see happy and proud gay, lesbian, transsexual and every color of the rainbow folk actually liking and supporting each other. Or would youth even want to join this community if they saw the way we’ve been acting lately?’