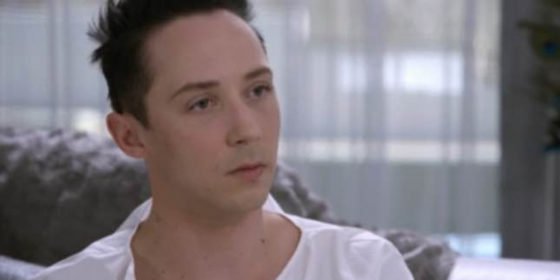 Champion figure skater Johnny Weir is speaking out about his ‘terrible divorce’ from Victor Voronov in 2014.

Voronov had gone on the syndicated US show Inside Edition and accused Weir of a host of things from biting him to marrying him to provide fodder for a reality show.

‘In those situations a lot of things get said and being a public person, there are things you can’t fix – you can’t publicly say that that’s not true,’ Weir says on the latest episode of the E! Entertainment series Hollywood Medium With Tyler Henry.

‘There’s so little that people actually know about that period of my life because I wasn’t sharing it with the whole world. It was a very difficult time for me to sit and not stick up for myself and not say anything.’

Voronov had hinted that Weir, a three-time US national champion, suffers from Obsessive Compulsive Disorder.

He also claimed Weir has about 200 furs and turned one of the bedrooms in their apartment into a giant closet to store those as well as 1,400 pairs of shoes.

Now 32, Weir says it’s difficult for him to think about another relationship.

‘I had a terrible divorce and I fled from that situation,’ he says.

‘So I’m always kind of thinking, “Oh how nice it would be to be with someone” and then I stop myself because that could happen again. It’s very, very hard.’