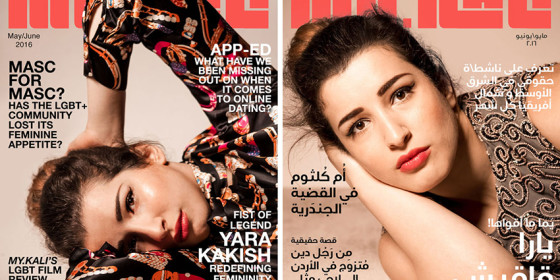 The Jordanian government has shutdown the only LGBTI media outlet in the country. Now it is embroiled in a social media war with an anti-LGBTI politician.

My.Kali is an e-magazine that was the first of its kind not only in Jordan, but North Africa and the Middle East.

It was shutdown in July 2016, but gained attention recently when MP Dima Tahboub filed a complaint against My.Kali.

Tahboub who has long been an opponent of the LGBTI community complained My.Kali was not properly licensed in Jordan.

In her complaint Tahboub used the word ‘shawath’ – meaning sexual deviant in Arabic – to describe the magazine.

Since her complaint the social media war between My.Kali and Tahboub and their respective supporters has escalated.

‘The fierce and inciteful media attacked the webzine and all what it represents, along with frightening comments on social media, which were centered around hate, death threats and physical abuse by people who could identify Khalid Abdel Hadi, editor-in-chief and the founder of My.Kali,’ My.Kali’s public relations manager Jameel Jones told StepFeed.

Homosexuals are not welcome in Jordan

Two weeks ago Tahboub told DW’s Conflict Zone that gay people were not welcome in Jordan.

This was after she lead the second successful ban of Lebanese group Mashrou’ Leila from performing in the capital Amman. Led by gay singer Hamed Sinno, Mashrou’ Leila is also politically outspoken on LGBTI and gender rights.

Homosexuality is not illegal in Jordan, but is not accepted socially

‘I don’t want to deal with them [homosexuals] as criminals, but all countries, and the UN specifically, should respect what is normal in Jordan,’  Tahboub told Roya News English.

‘We regard gays from a moral and religious perspective, that they are a community who is completely rejected, alien to our religion and tradition and the Jordanian people’s cultural norms.’

My.Kali responded to those claims saying it has no intention of changing Jordanian culture or to ‘spread homosexuality’. It said it did not publish physical copies of the magazine, because it goes against the country’s laws.

‘The magazine’s goal was never to underestimate the habits or culture of Jordanian society, nor to try to ‘spread homosexuality’ (homosexuality in any existing society and not as a result of systematic campaigns or action),’ My.Kali’s statement said.

‘As an independent radical project, My.Kali is not funded or supported by any foreign governments or organizations and has never been part of any external agenda.

‘It is the pure product of a constantly changing group of youth activists who are straight, LGBTI or the Mim community of the Arab World and North Africa, interested in representing marginalized voices to express their problems, interests and sharing their creativity.’