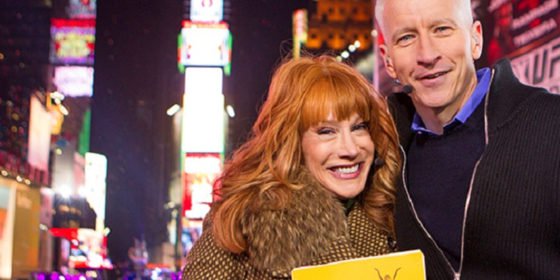 Kathy Griffin was defiant and at times spoke through tears during a dramatic press conference on Friday (2 June).

But the only time she was absolutely unable to speak was when she was asked about Anderson Cooper.

The press conference was called in the aftermath of the severe backlash over a photo she posed for with what appeared to be a decapitated Donald Trump.

The controversy is costing Griffin work,

Griffin could only manage to silently shake her head no when asked if she had spoken to Cooper since CNN this week fired her from her long-running gig co-hosting New Year’s Eve coverage with him.

Prior to the firing, Cooper had taken to Twitter and wrote: ‘For the record, I am appalled by the photo shoot Kathy Griffin took part in. It is clearly disgusting and completely inappropriate.’

The two had not only been a successful television team for more than a decade, they have also been personal friends, appeared on each other’s talk shows and even did a CNN pilot together.

Of the CNN firing Griffin said: ‘It’s hurtful to me. There’s a bunch of old white guys trying to silence me and I’m just here to say that it’s wrong.’