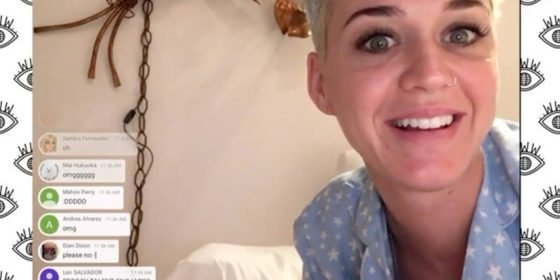 Here it is: my Chris Crocker moment.

But while the original YouTube celebrity’s Britney fandom was astronomical in 2007, mine for Katy Perry today pales in comparison. I’m not even one of her 99.8m followers on Twitter.

That said, I like her. She’s self-deprecating and funny. She’s got at least five perfect pop songs songs I absolutely love. (Like Hot N Cold, Waking Up in Vegas and E.T. – obviously I despise Firework).

Also, I’ll also never forget my own pathetically insignificant interaction with her. I was working as a PR intern in London in 2008 and had to fetch her a Starbucks. She made eye contact with me and smiled pleasantly in return.

From then on I was convinced. Katy Perry’s alright.

Which is why I feel the need to write this in response to the kicking she’s getting at the moment. Witness, her fourth album, is getting some very negative reviews. Granted, the cover’s a travesty and it’s not her best work, but it’s not that bad. And it’s still poised to hit number one on the Billboard 200 this week.

Much of the criticism seems centered around the plasticity and simplicity of the music – the banal lyrics of Bon Appetit and Swish Swish are undeniable – but what’s the big deal? People listen to Katy for fun and entertainment, not Beyonce-style artistry. None of her past albums were met with critical acclaim, but they didn’t receive the twist-the-knife-in coverage Witness is getting.

By the way, Chained to the Rhythm, the semi-‘woke‘ lead single was fantastic. But because it didn’t reach the lofty heights of I Kissed A Girl, California Gurls and Roar – despite being infinitely more interesting – it’s considered a failure.

Thus, Katy is a victim of her own success. The writing’s been on the wall all year. And it’s all over the walls of the plush LA apartment she livestreamed her own life from last weekend.

Many will argue Katy has nobody to blame for the difficult time she’s having but herself. Indeed, the comments about Britney at the Grammys this year were unacceptable. And the many accusations of stupid, obvious cultural appropriation she’s received over the years are indefensible – but it seems she might be learning her lesson now.

Beyond this, I’ve got to stick up for her.

First, Katy’s political awakening and endorsement of Hillary Clinton last year. It’s rubbed people up the wrong way. The right are obviously pissed. But what about the left? Do they see her as a scapegoat, like Lena Dunham? If so, come on. They had the best of intentions. Who wouldn’t have done the same in their shoes? Katy’s courage impressed me. Especially given her parents are conservative Christians who she loves dearly.

The there’s the Taylor Swift feud. Katy apparently ‘can’t stop’ addressing it. Well, as a journalist myself, I dare say she’s fielding questions on this topic constantly. Also, I’ve never fully understood the controversy with this story.

So what if Taylor and Katy don’t make up? They are professional rivals. That doesn’t allow for sabotage, but as feminists in the public eye, I’m uncomfortable at the expectation they must pretend to adore each other if they don’t.

Then there’s the LGBTI community. I sense a growing distaste. ‘Katy Perry is cancelled,’ posted one gay guy I follow. ‘Why is Katy Perry still a thing?’ posted another.

Yes, Ur So Gay is a pile of offensive rubbish. But it’s almost a decade old. And I can’t remember the last time she performed it. More importantly, does she regret writing it? I bet she does.

In my view, she shouldn’t apologise for I Kissed a Girl. I think it progressed a cultural conversation about experimentation years before the term ‘fluidity’ was a thing. And there was authenticity to it – as she recently revealed, she’s gone further with girls than just kissing.

Despite this openness, she sparked a backlash this year by working with the openly homophobic Migos, exasperated by the fake news surrounding a subsequent SNL performance involving drag queens.

But addressing the collaboration in a recent Guardian interview, Perry made some important points: ‘First and foremost, I didn’t know about [the Rolling Stone interview] when I met them,’ she says. ‘I didn’t do a background check. Some people don’t say the things you want them to say, because they don’t know how to say them. There’s also a double standard – no one said anything about Frank Ocean, who worked with them on a track, or Liam Payne, who uses [Migos’s] Quavo [on his new single]. Nobody’s talking about that.’

So, assuming a lot of the disapproval isn’t justified, what’s with the witch hunt? Misogyny.

Especially in the UK, we love to build women up to tear them down. Former X Factor star Tulisa is one grandiose example. ARTPOP-era Gaga’s another. I observed the latter’s cultural fall from grace with as much fascination as this one. And looking back, I had less sympathy. I thought she was overexposed and arrogant at the time. But then I missed her. After quiet few years, it was good to see her back on top with Joanne and this year’s Super Bowl performance.

The point here is Gaga, like Britney and Madonna before her, staged a successful musical comeback. Katy probably will too. She may even get this campaign back on track. But even if she doesn’t, she’s got her stint as an American Idol judge coming up, and a mountain of awards and hundreds of millions of record sales as evidence of her talent, hard work and spirit. Try as we might, we can’t take that away from her. A flop? On what planet?

We expect our female pop stars to be perfect. We have the same expectation of women generally, albeit this is hyper-intensified. But nobody is perfect, and such oppression is dangerous. Only last week, Katheryn Hudson admitted the pressure to be Katy Perry has led her to depression and suicidal thoughts.

Just like everyone else, we as LGBTIs – especially gay men – should correct our unrealistic expectations of women. OK, Katy’s said and done some stupid stuff, her new album isn’t the best and you don’t like her short hair. I don’t care. Get over it.