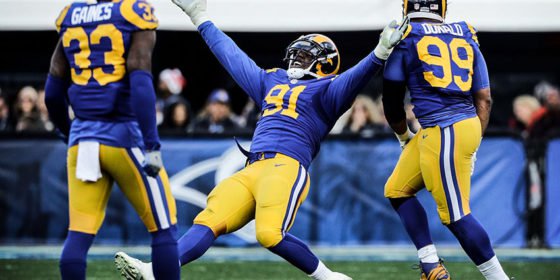 A California football team is the first NFL team to sponsor a Pride event.

The Los Angeles Rams are the sixth most valuable team in the NFL, according to Forbes.

They made LGBTI history, too, when they drafted Michael Sam in 2014.

Sam is the first openly gay NFL player to enter the draft.

From today (2 June) the famous Venice sign will light up like the rainbow flag, with each letter shining in a different color.

The Rams’ colors are blue and gold, so they are sponsoring the blue letter C.

‘Inclusion has always been a valued part of our organization,’ a spokesperson for the Rams said in a statement.

‘And we see this as a unique way to publicly celebrate the diversity that makes this community so special.’

While there are plenty of negative messages, just as many fans are excited about their team’s push for equality.

‘Go Rams! You deserve praise for being a role model in the sports world,’ one user wrote.

And the positive messages even let some users forget any potential team rivalry for a moment.

The Rams are not the first NFL team to sponser an overall LGBTI event, though.

The New England Patriots recently announced they would be sponsoring Boston’s Gay Bowl – a national flag football tournament for the LGBTI community.