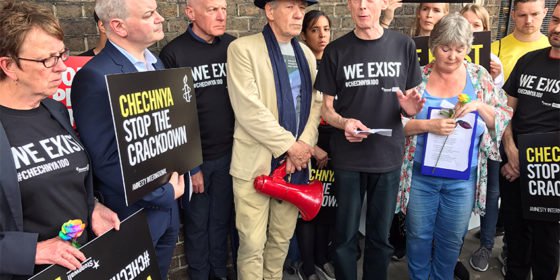 The ‘We Exist’ protest was organized by Stonewall and Amnesty International. It took place to demand that Russian authorities carry out a full and thorough investigation into the persecution of gay men in Chechnya.

Similar events are taking place outside other Russian embassies around the world, according to Stonewall.

Authorities in Chechnya are believed to have carried out a purge of gay men since February, with up to 200 men arrested and three deaths related to the arrests.

Chechnya authorities have consistently denied the arrests have taken place. However, they based their denial on the claim that gay people do not exist in Chechnya.

Today’s protest, with activists wearing T-shirts emblazoned with the words ‘We Exist’, was organized to counteract this claim.

‘Perhaps the Russian authorities will drop their ludicrous claim that gay people in Chechnya don’t exist when they see the crowds outside Russian embassies around the world.’

Activists held signs and posed for photos in front of the embassy in Bayswater. There was an attempt to hand over a petition with 177,000 signatures to the embassy, calling for greater action on LGBTI persecution.

However, when activists rang the buzzer to be allowed to approach the embassy they were denied entry. 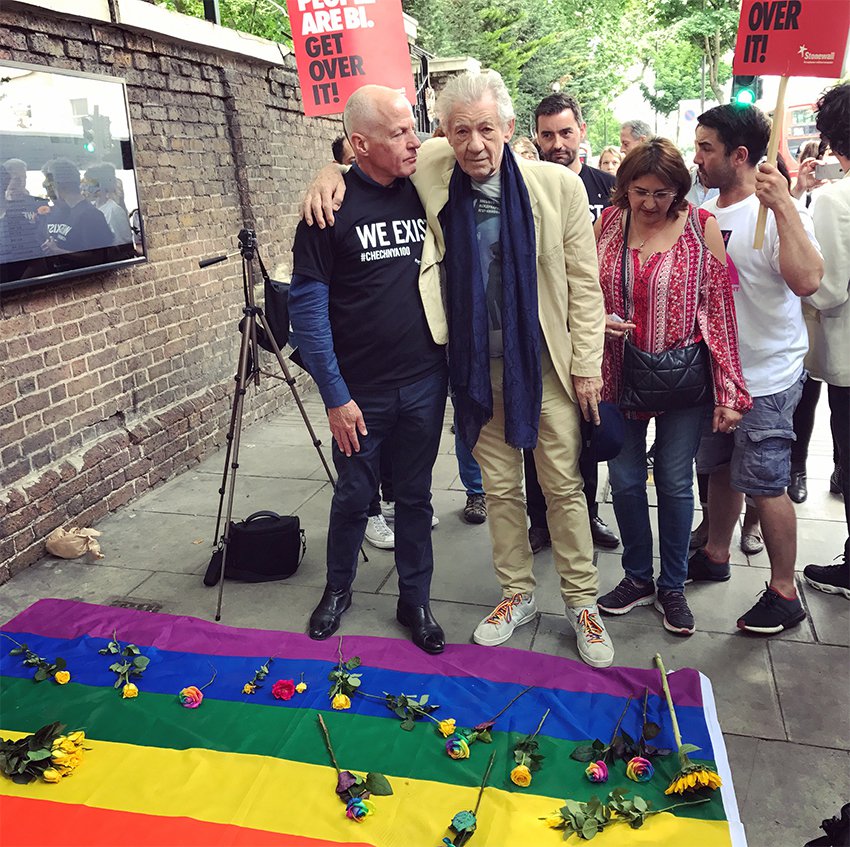 Michael Cashman, member of the House of Lords, and Ian McKellen, lay rainbow roses on a rainbow flag outside the Russian Embassy

Among those to address the crowd of around 100 activists were Ian McKellen, a gay Russian asylum-seeker named Dmitry (he asked that his full name not be used), and human rights activist Peter Tatchell.

McKellen read out a message from the Russian LGBT Network.

‘Thank you for coming out to show your solidarity. Right now, we need you. We need you to demand justice and for your government to take action,’ it said.

‘Our government has failed the people of Chechnya’

Peter Tatchell called for activists to stand in solidarity to with all Chechen people – gay and straight – who are being persecuted and repressed by Chechen authorities.

‘Our government has failed the people of Chechnya for a long, long time,’ he said.

‘It is failing LGBT Chechens in particular. Our government should be imposing targeted sanctions on Chechen human rights abusers, whether it be LGBT people or any other Chechens.

‘That means travel bans, the freezing of bank accounts, and restrictions on student and others coming to this country where they are members of leading families of the Chechen regime.’

He also lambasted British Foreign Secretary Boris Johnson for not raising the issue of Chechnya at the United Nations’ Security Council or Human Rights Council.

LGBTI Poet Laureate Trudy Howson then read out a poem that she had written in response to the situation in Chechnya, which we’re re-printing below.

Dmitry told GSN that he believed it was ‘really important’ that international activists maintain pressure on Russia and Chechnya. 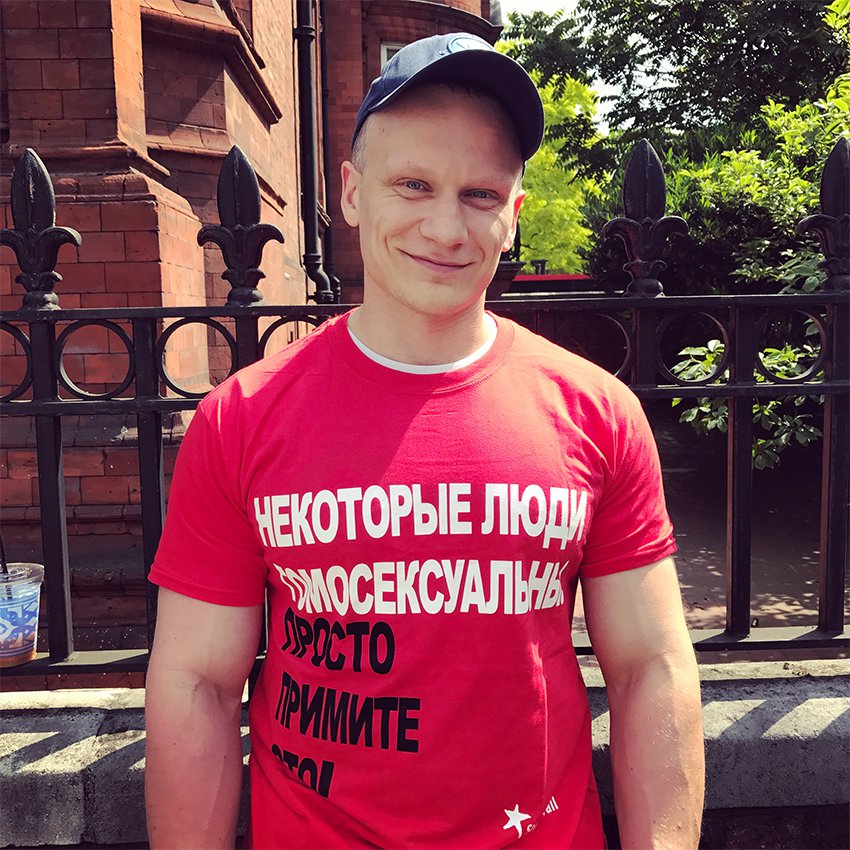 He left Russia two years ago because of the fear of facing persecution there and said many of his friends had also left, with more planning to do so.

Dmitry is currently still seeking asylum in the UK, and the situation in Chechnya had made him even more fearful of the prospect of ever being forced to return to Russia.

‘It makes me more scared now at present because there’s still a possibility that I might be sent back.

‘I’m firstly devastated that it’s happening back there, and secondly, because I can still be sent back, I fear for my life and what might happen in my future. That’s why I’m here. I feel that I have to say some words and stand up for my people.’ 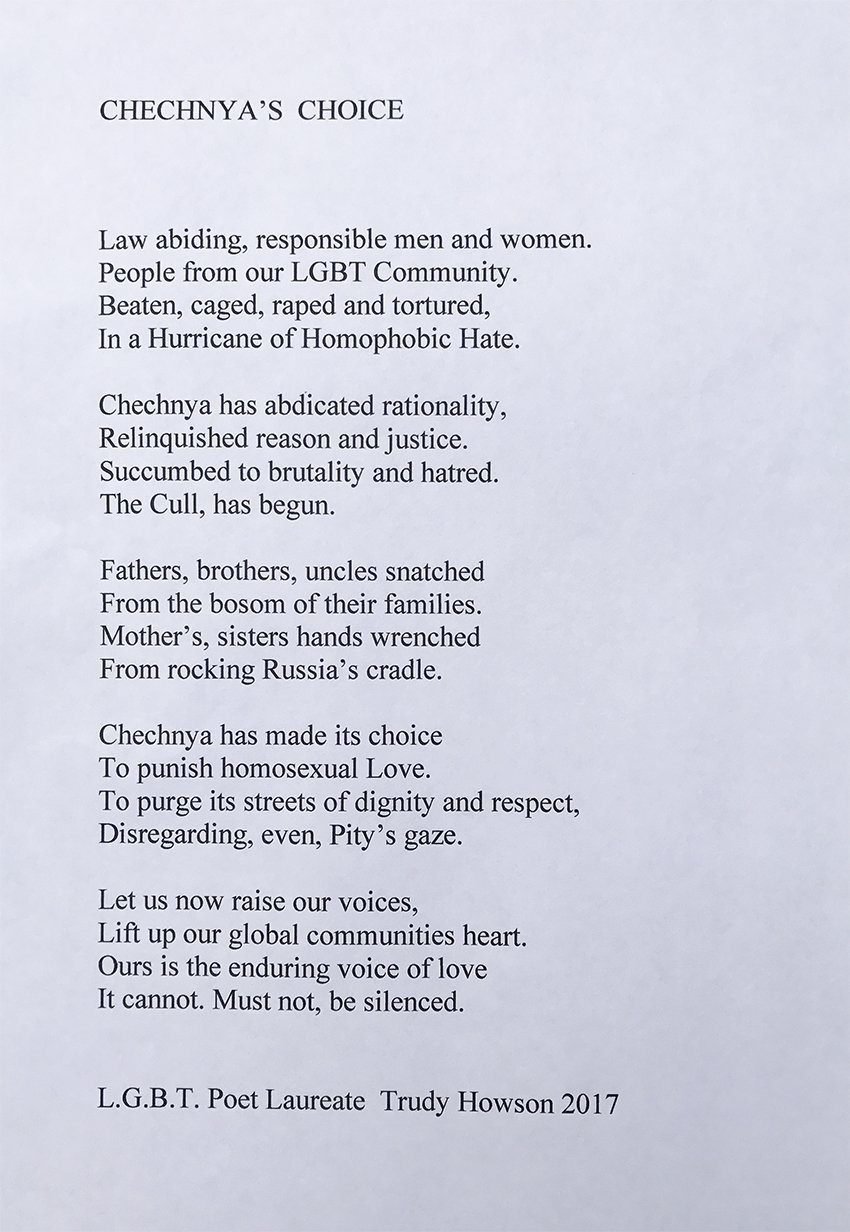