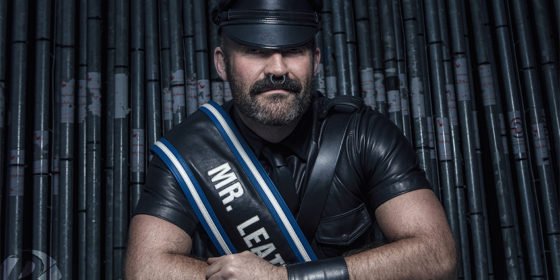 In a heartfelt Facebook post the current holder of the Mr Leather Europe title has opened up about being in a previous abusive relationship.

Committed leatherman Joe King became Mr Leather UK at the end of 2015. He went on to then become Mr Leather Europe 2016. It was under that title that he competed in the recent International Mr Leather (IML) competition in Chicago.

During his appearance he spoke about the community he had found on the leather scene and thanked them for their support. He wrote the Facebook posting to reveal more of his personal journey.

‘In 2001, I found myself in a relationship with a man who could only be described as a malevolent bully,’ he writes.

‘He was emotionally, mentally and physically abusive and systematically broke me down over the next five years, to a point where my confidence was at an all-time low. I’d lost all contact with friends and I was unable to cope with the very basic things in life.

‘I secretly fantasized in my mind about the day I would be free of him, but I was so exhausted that I knew I didn’t have the strength to face the fury that he would direct at me.

‘For two years he tortured me, punishing me for daring to say enough is enough.

‘He ran up debts in my name, refused to pay his half on our mortgage and got us into arrears and the house got foreclosed, gave my dog away, sold my car and kept all my possessions.

‘He had me arrested for a fictitious assault, harassed my family and employer and made up horrible rumors about me. In the end the harassment got so bad that the police arrested him and kept him in cells for over two days.

‘In the end I had lost everything I owned and worked for my whole life. I was bankrupt, broken and dead inside.

‘I moved to Halifax, a place where we had no connections, a place he would never find me, a place to try and find myself again.

‘I met my current boyfriend completely by accident on a train.

‘Kind, warm, sweet, sensitive and handsome, the polar opposite of the monster I had escaped. Our relationship bloomed and I slowly recovered from the trauma.

‘I couldn’t bear to think of my past, I regularly had nightmares about him, and I would often suffer from panic attacks triggered by anything which would remind me of that time and spent my time reliving moments of crisis whenever my brain wasn’t occupied.

‘I had PTSD [Post-Traumatic Stress Disorder].

‘It took eight years for his power to fade, for me to unpick his impact on me and to come to terms with what I’d gone through.

‘In 2015 I noticed physical changes to my body, I was becoming very weak, couldn’t work out, the weight was falling off me and my muscle mass was shrinking. I was ill every other week, and had tonsillitis continually. Suddenly becoming gravely ill – I was told by the doctor that I either had liver cancer or HIV.

‘I immediately knew it was the latter; yet again he’d come back at me with the final act of punishment.

‘The past hit me like a train, yet again, day after day from this day forth I would be forced to have to think about him, inside my body was a permanent reminder of this “man”, a living scar.

‘I knew I should’ve been tested, and thank God I only ever played safe, but I was so traumatized by my experience, I couldn’t bear to revisit the past. And now there was no choice, I had to face it.

‘The diagnosis was confirmed. It was HIV. My immune system was almost none existent, the viral load was through the roof and my blood platelets were incredibly low.

‘I started treatment just at the point of getting a bout of tonsillitis which brought me face-to-face with my mortality. I was terrified, and right back where I was ten years before. I had a grueling 12 months on treatment that had awful side effects and made me consider suicide every day. My future felt bleak.

Support from the leather community

‘It was at this point I reached out to my leather family.

‘I had always kept my leather at home, wearing it for play and going out to leather nights, but always being separate and isolated.

‘The acceptance, love and support I received gave me the strength and the courage to get through, all given unconditionally and with absolute selflessness.

‘I was welcomed with open arms and I met other men who had had similar experiences and fought similar fights. For the first time in 15 years I felt like I belonged and I was utterly blown away by the real community I had found, a community that during all these years I had never known existed.

‘My community gave me my life back, helped me come to terms with my health and my new body.

‘This was my motivation for running for a title – to get the message out there that we have the most incredible band of brothers and sisters and our own judgment-free community. That our community understands the challenges faced by poz people and openly discusses, educates and supports. 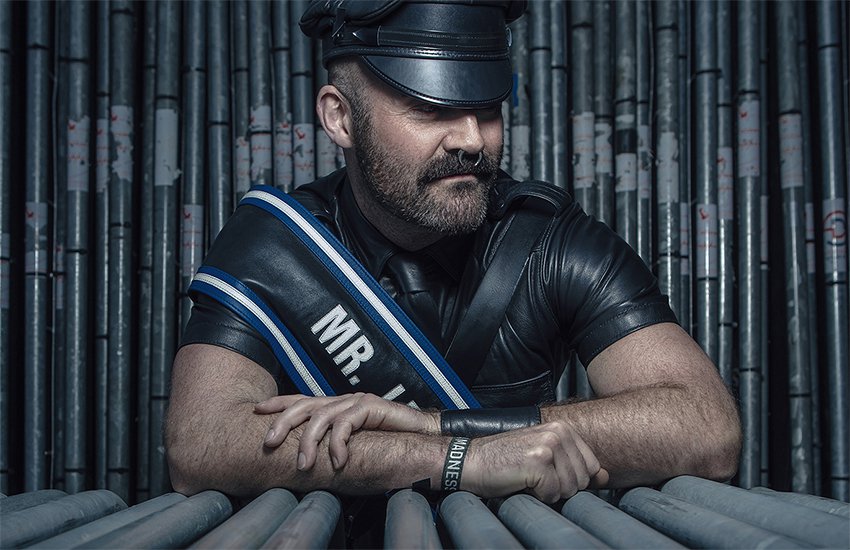 ‘Even after intensive counseling, my experiences have changed me forever: I no longer enjoy S&M/power play and I will never be fucked again.

‘But, I will be forever grateful for being picked up, held and carried by our amazing community. I owe a debt of gratitude to you all that I can never repay: I am deeply, deeply thankful.

‘That is the story behind my IML speech, why I will always defend what we have and why I chose, and needed, to say the words I did on that stage.’

King told GSN that his health is currently ‘excellent’ and his viral load undetectable.

Asked why he didn’t leave his former partner earlier, he says: ‘When I first met him, his outrageous behavior was quite attractive to me, but it quickly became very difficult to deal with.

‘He would be mean to waiters and fall out with everyone, seemingly without rhyme or reason. A night out could suddenly and unexpectedly deteriorate into a furious row because I would be accused of something ridiculous.

‘He would often ignore me for days, refusing to speak to me before finally accusing me of something that justified his behavior. Before long I was permanently on edge, waiting for the next event, trying my best to keep his mood up and to not look at someone the wrong way, say anything out of turn, contradict him or put a foot wrong.

‘We had bought a house together which I was renovating. I made a decision to leave him when it was complete so I could get my money back. Every week he changed his mind about the work and demanded more and more – I was trapped in a spiral controlled by him. All the whole, I was getting lonelier, weaker, more and more depressed.

‘It’s incredibly difficult to escape a situation of abuse when you are in it. I look back on it now and cant imagine ever being sucked in like that, but I can still remember the horror I woke up to virtually every day, the stress and the strain.’

‘Reach out to anyone you trust’

Asked if he had advice for anyone else who felt trapped in an abusive relationship, he said, ‘You must always remember you don’t need to live that way. You can find peace an happiness again.

‘It can be difficult if, like me, your social networks have been systematically shut down and/or monitored, but reach out to anyone you trust. Your family if you have one, a close friend, your community – anyone. You need a lifeline and someone outside of your situation to help you plan your escape.

‘There are organizations who can help you. If you fear for your safety, do not hesitate to contact the police. Try and keep a record of what you experience. Always remember that you deserve to be happy and treated with respect.

‘You might think you don’t have the strength to escape, but I can tell you from experience, it’s easier than the daily endurance of living with an abuser.’

Read also: This is what it’s like to be gaslighted in a relationship.