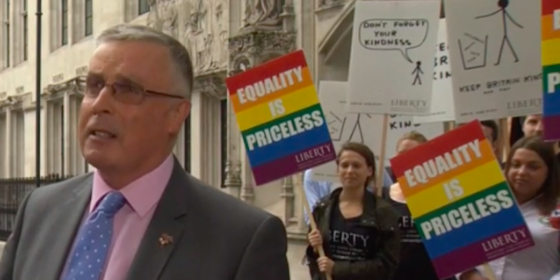 The UK Supreme Court has ruled same-sex married couples should get the same pension benefits as straight couples.

John Walker, an ex-British army officer, brought the case with the help of human rights organization Liberty. He has been battling for five years to get this ruling.

Money paid into pension funds before December 2005 can now not be excluded.

The Supreme Court ruling comes into law immediately. From today companies who are taking advantage of the exemption will be breaking the law.

Speaking outside the Supreme Court in London, John Walker said:

‘As a grey-haired pensioner, I took on a 1 billion super large chemical company in a classic David and Goliath case.

‘I am absolutely thrilled at today’s ruling, which is a victory for basic fairness and decency. Finally, this absurd injustice has been consigned to the history books – and my husband and I can now get on with enjoying the rest of our lives together.

‘But it is to our Government’s great shame that it has taken so many years, huge amounts of taxpayers’ money and the UK’s highest court to drag them into the 21st century.

‘In the years since we started this legal challenge, how many people have spent their final days uncertain about whether their loved one would be looked after?’

How will Brexit effect this judgment?

This ruling comes based on the exemption breaching EU Laws.

Human rights group Liberty whose lawyers acted for Mr. Walker said they were delighted by the judgment.

However, the Liberty Lawyer Emma Norton, said: ‘This ruling was made under EU law and is a direct consequence of the rights protection the EU gives us. We now risk losing that protection.

‘The Government must promise that there will be no rollback on LGBT rights after Brexit – and commit to fully protecting them in UK law.’

This is something Walker also reiterated outside the court: ‘What I would like from Theresa May and her ministers today is a formal commitment that this change will stay on the statute books after Brexit.’

Why did this loophole remain?

Steve Wardlaw, Chairman of Emerald Life the inclusive insurance provider said ‘No-one expected John to lose the case because it’s a clear breach of European law, [the loophole] was an attempt to use UK equality law to lower economic liability and that isn’t allowed.’

Wardlaw noted that there is a cost to equality because ‘equal benefits cost money.’

‘At the time there was a concern that companies would have to re-assess their pension liabilities because a new group of people that weren’t covered, would get these benefits. This could have increased their liability’

Steve said that though companies could use this loophole, the vast majority of companies had already taken the moral high ground and did offer the same benefits to same-sex couples.

Post-brexit Wardlaw doesn’t think the government will roll back on the main principles of equality but warned that ‘where there are regulations that don’t get as much press like those on adoption, the government may seek to reduce their economic liabilities.

‘They aren’t going to be anti-equality when they get jurisdiction back, but if they are going to make any changes, it will be to save money. We need to remain vigilant.’