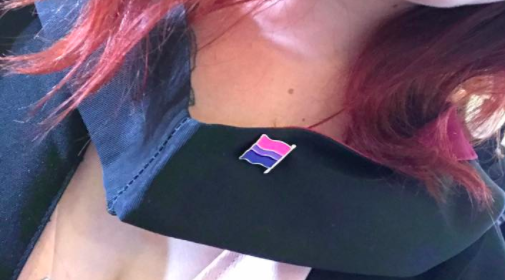 My graduation robes had an extra something compared to everyone else.

On Monday I graduated from the University of Westminster with a degree in radio production.

And I proudly wore a bisexual flag pin badge on my robes.

Most of my friends and family know I’m bisexual at this point. I quite often call myself an ‘obnoxious bisexual’.

I want to people to ask, learn and be educated.

Bisexuals face erasure, invalidation and biphobic comments from both outside and within the LGBTI community.

I’m not the only student who believes the more visible we are, the more normalized and accepted in society we become.

So this badge was me making myself visible at an event some would label one of the most important in my life.

Wanting to increase the visibility for bisexuals wasn’t my only reason for wearing the badge. My sexuality is a huge part of who I am. 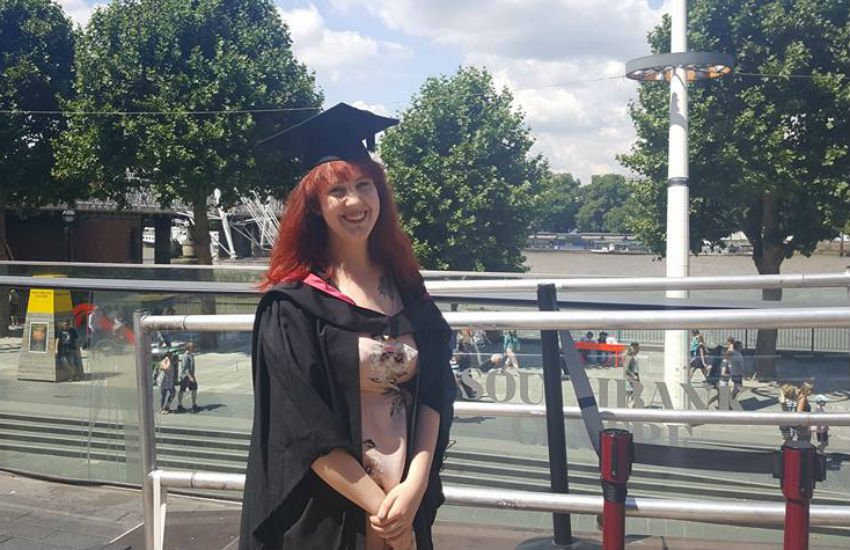 She paraded the badge around Southbank Centre

I volunteer for National Student Pride, I work at an LGBTI news site and I am unapologetically a bisexual activist.

A lot of people say your sexuality is just a small part of you and it shouldn’t be such a big deal. But I use the position I’m in to try and make life easier for bisexuals who don’t have it as easy as I do.

Some young bisexual people have their sexuality constantly disregarded. Or told they’re just going through a phase, or just confused. Even worse, they get labelled greedy.

Growing up, there weren’t any very prominent bisexual figures I could look to when figuring out who I was. That’s the role I want to play for others.

One can only imagine how much quicker I’d have come to terms with my identity rather than over a span of five years.

Not only that, I would not be where I am today without the people I’ve met through being bisexual.

My LGBTI friends have helped me become more confident in who I am and have pushed me to do things I never previously would have been able to do on my own: This badge was sort of a nod to them too.

I recently heard when some bisexual people enter a new job, they let their colleagues just believe they’re either gay or straight. To be honest, hearing this makes me so sad.

A German bisexual woman who now lives and works in the UK explained earlier this month the biggest issue she faces as a bisexual woman is invisibility. People in her place of work assume she’s either straight or gay depending on who she’s dating at the time.

The only way to combat bisexual erasure is tackling those comments. If someone refers to you as gay, correct them. The same goes if they call you straight.

It just felt so important to me to have the badge there. If I hadn’t have worn the badge, I’d have been so annoyed with the fact I knew I had it at home and I didn’t take the opportunity to show people that bisexuals exist.

Being bisexual is something I’m so loud and proud of, and more bisexual people need to be too.