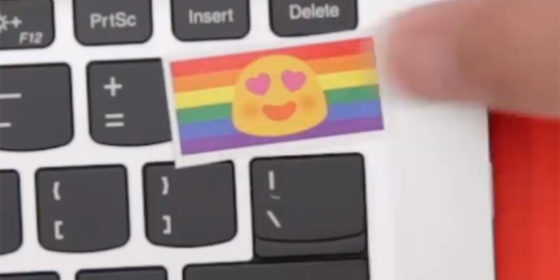 For Pride month in the US in June, many big corporations made pro-gay social media postings.

Perhaps a little late to the party is computer company Lenovo. The tech giant, best known for its laptops, posted a short video to its Twitter and Facebook accounts on the weekend.

‘Progress spelled backwards is ssergorp. Just one of many reasons going backwards makes no sense,’ says the posting, followed by the hashtags #BetterTogether and #Pride2017

The video sees people removing the backspace key from their keyboards, and replacing them with rainbow stickers, while the slogan ‘Progress only moves forward’ appears on the screen.

The film has provoked a mixed reaction, with some people appearing to think that the company is actually considering removing the key.

Others have questioned the quality of the advert or the focus of the message.

‘The best sponsored video ever to pop up on my feed’

Unsurprisingly, many have taken the opportunity to voice homophobia or to bash Lenovo over the quality of its merchandise compared to other computer brands (step forward Apple devotees).

The advert has also drawn plenty of praise for its pro-diversity stance.

Lenovo is headquartered in China. Lenovo (US) is headquartered in Morrisville, North Carolina. The latter scored the top ranking of 100 on the most recent Corporate Equality Index from Human Rights Campaign. The index scores companies according to their LGBT-friendly policies and procedures.

It’s not known if the video was commissioned in the US or China. GSN has approached Lenovo for comment.

The advert doesn’t appear to feature on Lenovo’s Weibo page. Weibo is a hugely popular social media site in China – comparable to its version of Facebook.

‘We’ve come too far to go backwards says their ad in support of LGBT equality, but Lenovo still has a ways to go back in China to fulfill their obligation to LGBT employees and customers,’ said Steven Paul Bielinski, Founder of WorkForLGBT, a non-profit network for local LGBT employees and platform for dialogue and cooperation with companies in China on LGBT corporate equality.

UPDATE 03.08.17: A spokesperons for Lenovo told to GSN: ‘Lenovo is committed to building a strong and diverse workforce across the globe. It gives us a competitive advantage and the ability to understand the world in which we operate better.

‘We run campaigns championing all forms of diversity across our global social channels and #bettertogether is great example our support for Pride 2017.’