West Hollywood, California is known to have the largest percentage of LGBT residents and is a magnet for LGBT tourists from all over the globe.
One of the largest tourism event in Los Angeles, California is currently ongoing: LA Pride.

Today Los Angeles Police identify heavily armed man and arrested him near Los Angeles gay pride event. he was identified as James Howell of Indiana and has no known connection to Florida mass shooting. 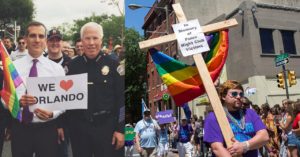 Hundreds of thousands of LGBT people and their allies are flooding the streets today of West Hollywood, California for the Los Angeles Gay Pride Parade, LA PRIDE’s centerpiece event. Featuring floats, music and a celebrity Grand Marshal, recognized for his or her contributions to LGBT rights and culture, the Los Angeles Gay Pride Parade is southern California’s largest LGBT event. The parade runs along Santa Monica Blvd. from Crescent Heights Blvd. to Robertson Blvd., and the bars and restaurants lining the streets join the party with all-day (and all-night) celebrations! Stay tuned for this year’s Grand Marshal.

The man was spotted “loitering” in the Santa Monica area before residents called police, according to Santa Monica Police spokesman Saul Rodriguez. When police stopped the man and searched his car, they found at least one assault rifle and an ingredient tannerite, which could be used to build a bomb, KTLA reported.

The incident occurred hours after the deadliest shooting in U.S. history, which occurred at Pulse, a popular gay nightclub in Orlando, Florida. Authorities do not believe that the two incidents are related, the Los Angeles Times reported.

Parade attendees tweeted images of the march and messages of solidarity for Orlando.

LA PRIDE, the world’s first gay pride parade, will celebrate with a 3-day festival on June 10-12th! Held in 1970 on the one-year anniversary of the Stonewall Riots, the first LA PRIDE event was a foundational event of the West Coast gay liberation movement. Since 1979, LA Pride has been held in the City of West Hollywood, the historical center of Los Angeles gay life. Today, PRIDE is a three-day festival dedicated to celebrating equality and defending the rights of LGBT individuals, incorporating music, art, exhibits, speeches, parties and, of course, the parade itself.

This year, LA PRIDE Grand Marshal is Jewel Thais-Williams, who opened one of the first black discos in the U.S. back in the 70s. Special musical guests include Charli XCX, Bebe Rexha, Carly Rae Jepsen, Faith Evans and Krewella.