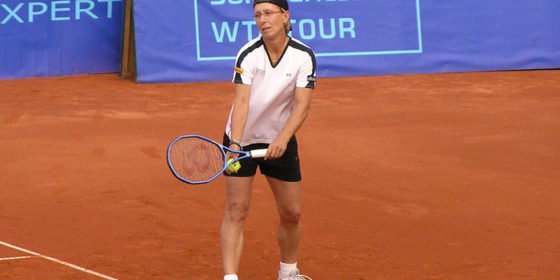 Martina Navratilova has branded Margaret Court ‘a racist and a homophobe’.

Navratilova said naming the arena after Court ‘seemed like the right thing to do’ at the time, given she is one of the all-time great players.

The player, who married businesswoman and former Russian model Julia Lemigova in 2014, also said she had forgiven Court for calling her ‘a bad role model’.

Court made the comments in 1990 and based them on Navratilova being a lesbian.

‘What I did not know about until now were the unabashed racist statements she made in the 70s about apartheid in South Africa,’ Navratilova said.

‘Saying that South Africa dealt with the “situation” (meaning people of colour) much better than anywhere else in the world, particularly the US: what exactly did she mean by that?’

She then lays into Court’s recent comments about the LGBTI community.

Last week, she announced she would be boycotting Australian airline Qantas because its (out gay) CEO supports marriage equality.

On Monday (29 May) Court linked transgender children to Hitler, the devil, and communism in an interview on a Christian Radio show; she also said tennis was ‘full of lesbians’.

Court also made ‘ridiculous comments about older women luring young girls on the tour to parties to turn them into lesbians’, Navratilova said.

’It is now clear exactly who Court is: an amazing tennis player, and a racist and a homophobe. Her vitriol is not just an opinion,’ Navratilova said.

‘She is actively trying to keep LGBT people from getting equal rights (note to Court: we are human beings, too). She is demonising trans kids and trans adults everywhere.’

Navratilova said kids ‘will suffer more because of this continuous bashing’.

‘How much blood will be on Margaret’s hands because kids will continue to get beaten for being different? This is not OK,’ Navratilova said.

‘We celebrate free speech, but that doesn’t mean it is free of consequences – not punishment, but consequences.

‘The platform people like Margaret Court use needs to be made smaller, not bigger.’

And she already has a new name on her mind.

Navratilova proposed renaming the arena to Evonne Goolagong Arena as it ‘has a great ring to it’.