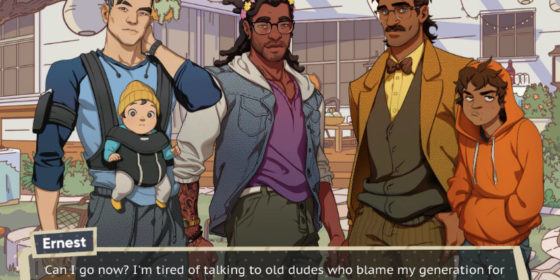 If you’ve been on Twitter in the last couple months, chances are you’ve heard of the new game Dream Daddy: A Dad Dating Simulator. If not, there’s no time like the present.

Published and developed by the popular group Game Grumps, and written by Vernon Shaw and Leighton Gray, the game hit computers on 20 July. Within a week,  it’s become the number one game on Steam, a PC store with over 125 million users.

The premise of the game is relatively simple: users create their very own dream daddy, who moves to a new town after being recently widowed with his 18-year-old daughter Amanda. Almost immediately upon arriving, love is in the air. Whether with Robert, the resident bad boy dad, Hugo, the teacher dad, or five other single gay dads in the neighborhood, the choice is up to the player. Meet the dads individually below.

Between dialogue choices, mini-games, and more, this relatively PG game, priding itself on its humor and earnestness, excited tens of thousands of fans with the promise of love. Most importantly, LGBTI love. In fact, excitement was so high that when the game’s released was delayed by a week, the developers released an apology with over 17,000 likes on Twitter.

With its loading screens offering ‘dad tips’  and a catchy opening song, the game is immediately charming.

Most importantly, Dream Daddy offers an inclusive and positive experience for fans not often found in the gaming world. The game already succeeds in offering LGBTI romances both respected and entertaining. However, it goes even further. Users have the choice to make their dad trans and their former spouse either male or female, acknowledging the spectrum of sexuality.

Not to mention the game is also, quite simply, an absolute joy to play. Its comedy punches up (and will actually make you laugh out loud) while promoting healthy familial and romantic relationships. It follows in the steps of games like Gone Home, Life Is  Strange, The Last of Us and more featuring LGBTI storylines and characters. It stands out, though, with its simplicity, colorful palette, and charming spirit.

Clearly, Dream Daddy was worth the wait.

Not sold yet? Don’t worry, you will be once you meet the seven possible dream daddies.

In the month leading up to the game’s release, the official Twitter revealed bios for the seven dads. The bios prompted more excitement among fans, leading to fanart, cosplay, and more. Now, fans are documenting their own experiences and love stories within the game on the social media platform.

Everyone, this is your new neighbor Hugo.
Wishlist Dream Daddy on Steam! https://t.co/SI6rlw2zoi pic.twitter.com/eSfQvvDebb

Everybody, meet your new neighbor (and old college roommate), Craig!

So which dad strikes your fancy? Personally, me and my dream daddy, Teddy Quince, have our eyes set on Hugo and Mat first.