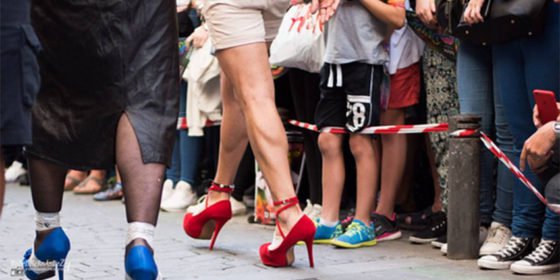 Men raced through the streets of Madrid yesterday for their annual ‘High Heel Race.’

Each year Madrid hosts one of the greatest LGBTI events, WorldPride Madrid. Dozens of men come together in celebration of Pride month by running through the streets of Chueca, a gay neighborhood in central Madrid.

The male-only event requires each runner’s heels be measured before the race. Rules state the men’s heels must at least be 10 cm (4 inches) high.

New York City is set to host 2019’s WorldPride in conjunction with the 50 year anniversary since the Stonewall Uprising.

This will be the first time the celebration will be held in the United States.

‘The Stonewall Uprising is considered the most significant event that ignited the modern LGBT rights movement, so it makes perfect sense to bring WorldPride to the birthplace of Pride in 2019,’ said David Schneider, NYC Pride’s Stonewall 50 Director.