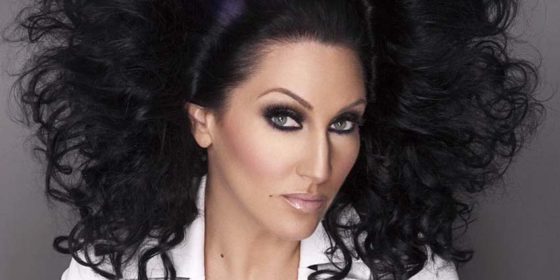 Michelle Visage has spoken out in support of the teen who says a meeting with the TV personality ‘saved my life.’

In a Reddit post speaking about his dad, he said: ‘I would spend money to go to shows all across the tristate area and he felt like it was a waste. He had seen the show in his peripheral before but never bothered looking at it for more than a few seconds.

‘Combine that with his brothers and my grandfather trying to convince him to disown me and ignore my identity and I was in a very vulnerable place. I didn’t know what was going to happen to our relationship or my future.’

Of meeting Michele, he said: ‘My jaw dropped when I approached the empty pop up shop. There was Michelle, just standing there, talking to the owner. She had a stack of head shots, but nobody was there to get one signed just yet. Being the excitable tweeny little gay I was, I shrieked and ran over to hug her.’

‘We talked for 20 minutes, one on one. She was sympathetic, but gave me tough love, like a mother would. She gave me advice on everything, just the two of us, in the back of this tourist trap candy store in Hollywood.’

On his dad, Brendan added: ‘She told him what a great son he had, how ambitious I am, how she knows how we’ve struggled and she’s gone through the same stuff with her kids.’

‘This moment marked a shift in my dad’s attitude toward me and my identity — he found Michelle to be so eloquent and asked me if they talked about this stuff on drag race. He was intrigued. So my mom, my dad, and I all started watching together every single week. We’ve been to shows together now.’

Speaking to Gay Star News in an interview to be published later this week. Michelle said: ’It was the sweetest story. It was was extra special to me because his dad got it. He saw his son. Finally.’

‘If I can keep opening parents eyes, then I’ll be the happiest girl in the world. I am so proud of you Brendan, but also mom and dad!’

‘I know who I am, I know what I represent and I know I can make a difference in some people’s lives. I want to do good. I want my legacy to be about love and equality and educating people who don’t have enough information.’

Elsewhere in the interview the star also admitted her husband David Case has never dragged up.

You can catch Michelle on the Werq the World tour this fall.