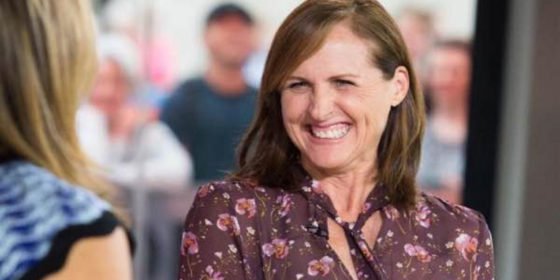 Molly Shannon plays the mother of a gay son in two of her most recent films and says there is a deeply personal reason behind her choice in roles.

Her father was gay.

‘He was 72 when he told me. He told me he was gay right before he died,’ Shannon said last weekend at a screening of the film Miles in West Hollywood.

‘We were sitting at the pool at the Four Seasons, and I said, “Have you ever thought you might be gay?” He said, “Most definitely.” And then we drove to Ohio and talked about it for the next 72 hours.’

Not that she didn’t have a few clues before he confirmed it.

‘When I went to NYU drama school, I would send him pictures of like a head shot of Judy Garland. I didn’t associate that he might be gay; I just thought, “He’ll love this!”‘ said the actress.

‘And then when I got my first color head shots, my dad framed it and threw gold stars all over it.’

In Miles, Shannon plays the mother of a gay teen who wants to play on the girl’s volleyball team at his high school.

Earlier this year she won the Independent Spirit Award for best supporting actress for her performance in Other People.

In that film she portrayed a woman dying of cancer whose gay son comes home to help care for her.

‘All stories about people being gay and coming out, I’m just so attracted to,’ she said.

‘It was my whole childhood. My whole life. I was the child of somebody who had to keep that secret. So anything I can do to let that out and tell all those stories is the most important thing to me.’