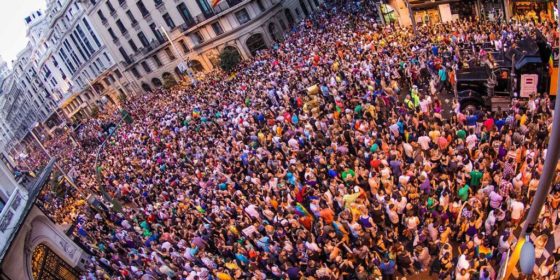 Gay and bi men across Europe have fallen sick as a Hepatitis A epidemic sweeps across the continent.

The UK is particularly badly affected with 500 cases already, mostly in London. NHS cutbacks forced many clinics to stop routinely vaccinate men against Hep A.

There is no treatment for Hepatitis A. Patients who get it have to hope their own antibodies kick in to rid their bodies of it. In most cases that happens, but for a very few people Hep A will be fatal.

Now doctors are worried that the summer Pride season will see the epidemic get even worse. The European Center for Disease Prevention and Control (ECDC) is particularly worried World Pride in Madrid will cause more infections.

How the epidemic spread

The ECDC is tracking three different variations of Hepatitis A. The spread may have started Berlin and Sitges, Spain – both popular destinations with gay men.

The number of cases has increased steadily since last June. This was the height of the Pride season with gay and bi men travelling across Europe to party. There are cases in at least 15 European countries so far.

But the number of men with Hep A skyrocketed in January, February and March this year. Figures for April and May are not yet published but are likely to be even higher.

Most of those infected are men who have sex with other men. And they are young. Many are in their 20s and 30s, the average age is just 33.

Yesterday, as the scale of the problem hit home, doctors in London received a letter warning them of the epidemic.

So far, the ECDC estimates 3,000 people have been infected.

What is Hepatitis A?

Many people get few or no symptoms. But you may suffer from nausea, vomiting, diarrhea, jaundice, fever and abdominal pain. Symptoms may return six months later.

Hepatitis A attacks your liver. It may cause acute liver failure and death, though that is rare and more common among the elderly or those with other conditions.

Have UK cuts made the epidemic worse?

Gay and bi men are particularly at risk from Hep A. If you use hook-up apps, go to saunas or darkrooms, or have sex with multiple partners regularly, you are more likely to be exposed.

Sex infection clinics used to routinely vaccinate gay and bi men for Hep A. But GSN understands around half of London clinics stopped this under budget pressure since the Conservatives came to power in 2010.

The course of two jabs costs around £22 a person and is usually enough to protect you for life.

Cutting that vaccination shield may have fuelled the London epidemic.

The NHS funded vaccinations again for a month in April to respond to the current outbreak. But that funding has now ended. Authorities are yet to decide whether to provide more money to buy more vaccine doses. Meanwhile some NHS services are still providing the jabs, others are not.

Many of the patients who get Hep A will have to stay in hospital overnight, some for a month or more. A night in hospital costs the NHS at least £500. So in the end, the decision to cut the vaccination program could prove a false economy, one expert told GSN.

And some people in the UK and elsewhere may be passing on the virus by preparing food after going to the loo and not washing their hands properly. This could spread the epidemic well beyond the LGBTI population.

Protect yourself from Hep A