Netflix is filming a new documentary about the life of transgender civil rights leader Marcia P Johnson, who died under mysterious circumstances in 1992.

The Death and Life Marcia P Johnson, written by David France, will recount the icon’s life and story, alongside fellow activist Sylvia Rivera.

Many LGBT historians praise Johnson and Rivera for launching the modern gay rights movement in New York City. Johnson was also a veteran of the Stonewall riots, and later in her life became an AIDS activist.

Marsha Johnson depicted in the 2015 film Stonewall. She appeared in the film, despite initial rumours of her being airbrushed out.

Johnson’s life ended in tragedy, however, when she was found dead in the Hudson River in New York City in 1992.

New York police initially ruled that her death was a suicide, but Johnson’s friends insisted the police were wrong. Several alleged witnesses came forward to say they had seen Johnson harassed by a group of local thugs.

The police finally reopened the case as a potential homicide in 2012 – 20 years after her death – following a campaign from transgender activist Mariah Lopez.

The documentary is written by by investigative reporter David France, who is openly gay. He has written previously about the child abuse scandal in the Catholic Church, as well as brutal homophobia in Iraq.

Commenting on the Marsha Johnson documentary, France said: “Almost single-handedly, Marsha P. Johnson and her best friend Sylvia Rivera touched off a revolution in the way we talk about gender today.

“Their names should be household words.”

France said he hopes that Johnson and Rivera’s legacy will live on through Netflix streaming his documentary. 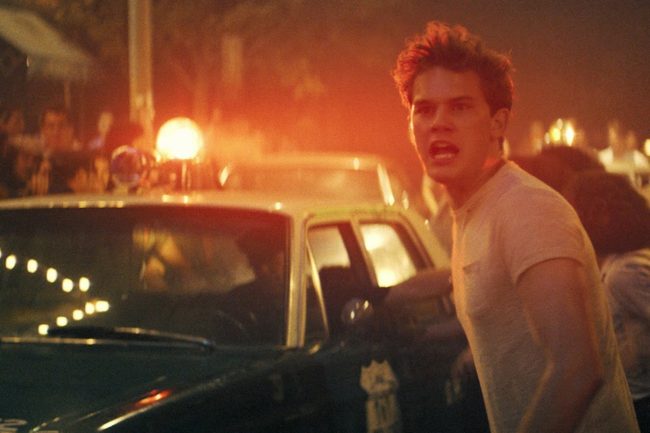 A depiction of the Stonewall riots in the 2015 film ‘Stonewall’

He wants viewers to understand the huge impact played by the women on the gay and transgender community.

After her activism during the 1970s, Marsha Johnson spent much of the 1980s campaigning with AIDS charity ACT UP, which involved finding food and clothing for young drag queens, transgender women, and poor children living on the Lower East Side of New York City.

In 1974 Johnson was pictured by famed photographer and artist Andy Warhol, as part of his feature on drag queens named “ladies and gentlemen”.

Netflix is set to release the documentary later this year.