Former UKIP leader Nigel Farage says he has “no hesitation” in supporting a US Senate candidate who has suggested gay sex should be criminalised.

Fringe UK politician Nigel Farage spoke at a rally in Alabama last night for Roy Moore, who is in the running for a vacant US Senate seat.

Moore is on course to become the most homophobic politician elected to office in recent US history, and has said that “homosexual conduct should be illegal” and compared it to bestiality.

Just last week Moore spoke at a debate where he complained that the US had been “shaken” because “sodomy [and] sexual perversion sweep our land”, also lashing out at “social experimentation like transgender troops in our bathrooms”.

But it did little to dissuade Nigel Farage, who has long dodged questions about homophobic views in the UK Independence Party. 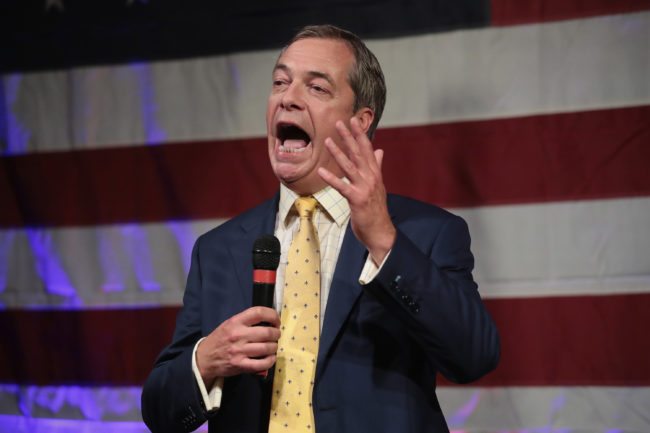 Speaking at the final rally before the run-off election, Farage gave his enthusiastic backing to Moore.

He said: “I have absolutely no hesitation in putting my support and my backing behind a man like judge Roy Moore, who has shown in his career that he will always put principle before his own career advancement.”

The comment appeared to be a reference to Moore’s dismissal from the Alabama Supreme Court for an illegal crusade against same-sex weddings.

Moore formerly served as Alabama’s Chief Justice, but was ejected from the role after fragrantly abusing his authority in a bid to block gay weddings in the state.

The disgraced justice had issued a string of orders declaring the US Supreme Court ruling on equal marriage “doesn’t apply” in Alabama due to state anti-gay laws, and ordered probate judges to enforce a gay marriage ban.

He said: “There are others on the left who are turning increasingly away from democratic process and towards violent, unpleasant, nasty protest.

“We see some on the left who now even want to rewrite history, tear down statues and pretend we are different people to who we are.” 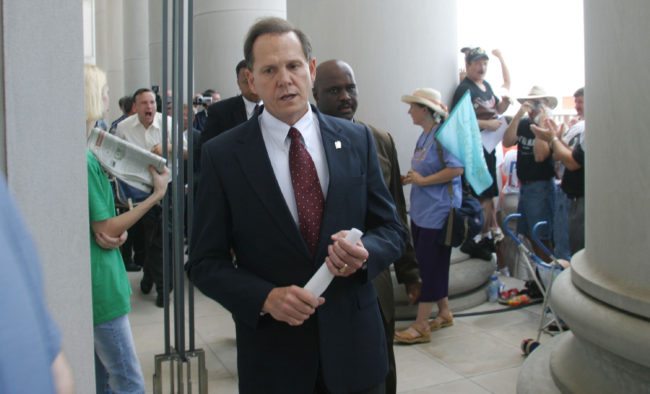 Moore has also compared gay sex to bestiality, saying: “Just because it’s done behind closed doors, it can still be prohibited by state law

“Do you know that bestiality, the relationship between man and beast is prohibited in every state? It’s the same thing.”

It was also revealed that he has appeared multiple times on a radio show hosted by pastor Kevin Swanson, who is known for preaching that gay people must be stoned to death.

In a 2015 interview Moore himself refused to say whether he supports gay people being put to death.

The winner of this week’s Republican run-off will take on Democrat Doug Jones in the special Senate election on December 12.

Victory in the GOP run-off all-but-guarantees victory in the special election, as no Democrat has won a Senate race in the state in more than two decades.