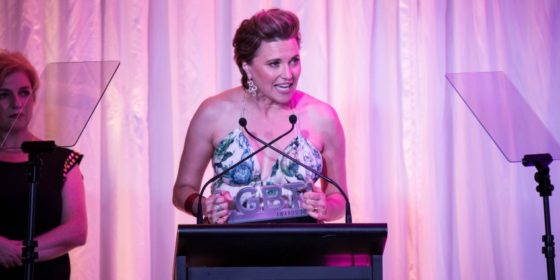 Arguably Australia’s most glitzy awards ceremony celebrating the LGBTI community has just opened its nominations for 2018.

The Australian LGBTI Awards modelled on the UK equivalent held its first ceremony during this year’s Sydney Gay and Lesbian Mardi Gras festival.

‘As a whole the LGBTI community spend a lot of time fighting for equality, it’s nice to be able to take some time out to come together to celebrate one another, and this is what the Australian LGBTI Awards is all about,’ said awards director, Silke Bader.

‘Everyone is welcome to nominate any individual who they think is inspirational to the community and upholds our values.

‘When nominating think of the people that have had a personal effect on you, those individuals who have been an inspiration to you and who continue to fight for the LGBT community.’

‘I’ve got so many awards around but this one is in my main room shining because I was so honoured by it. It’s incredibly important and makes me want to fight harder for equality,’ he said.

Organizers said the more people that vote, the more the nominations would reflect the LGBTI community.

‘The Australian LGBTI Awards is a chance to say thank you to esteemed individuals and to celebrate the diverse community that we have in Australia,’ organizers said in a statment.

People can nominate someone for the 2018 awards which will be announced in March in Sydney.