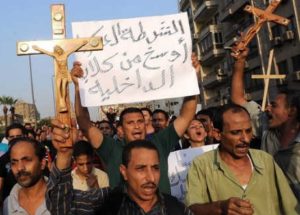 The Coptic Church in Egypt has reportedly organized a conference entitled “The Volcano of Homosexuality” which will offer a variety of ways to “treat” homosexuality.

St. Mark’s Orthodox Coptic Cathedral in Alexandria will set up the event to increase awareness about “treatments” for homosexuality and how best to ensure a “speedy recovery,” reports The New Arab.

A date for the conference has yet to be confirmed but early reports indicate that a number of workshops will be provided at the event by a “homosexuality healing specialist” who will provide instruction on gay conversion therapy.

The Coptic church has previously described same-sex relationships as “immoral” and a “threat” to family stability.

“Therefore this marriage is completely refused from the Christian faith,” head of the Coptic Orthodox Church, Pope Tawadros II, said when asked about gay marriage, as cited by Step Feed.

“When God created man and woman and for them the first family was made by man and woman. [gay marriage] is not acceptable and it is considered as a sin. It’s sin,” he added.

Homosexuality is taboo in Egypt among the nation’s Muslim majority Christians alike. The country has roughly 77 million Muslims and four million Christians, the vast majority of whom are Coptic.

Seven people were detained for flying the rainbow flag at a concert in Cairo on Monday.

“What happened at the concert cannot be accepted by society. Declaring yourself as a homosexual is not a human right,” lawmaker and Egyptian Member of Parliament Shadia Thabit said, as cited by The New Arab.

“How can they openly announce their sins? Don’t talk to me about human rights. They should go, get lost far away from us,” she said.

Abbas Shouman of the Al-Azhar mosque in Cairo described the incident as an “act of moral terrorism,” as cited by Egyptian Streets.

At a 2003 meeting of all Christian churches in Egypt, chaired by the former Pope of the Coptic Church, Shenouda III, leaders opposed attempts to legalize homosexual marriage, reports Egypt Independent.

Police in Egypt use decades-old laws to arrest members of the LGBT community including an anti-prostitution law established in 1950 and a 1961 law against “debauchery” which have been pretexts for raids on gay clubs and events in the country.