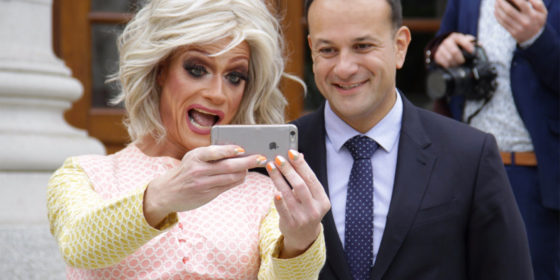 Leo Varadkar, the openly gay Prime Minister of Ireland, has said it’s only a matter of time until marriage equality in Northern Ireland.

The PM made the statement at an event ahead of Belfast Pride yesterday, which he said he was attending as a gesture of solidarity.

He was quoted by The Independent as saying: ‘I think it’s only a matter of time although it is of course a decision for the Northern Ireland assembly to take, but I am confident that like other western European countries they will make that decision in due course.’

The leader of the Fine Gael party also said he was at the reception ‘to state my support, my government’s support for equality before the law and individual freedom for all citizens no matter where they happen to reside.’

Varadkar, who is Ireland’s youngest-ever head of state since his instatement in June, was in Northern Ireland for a two-day visit.

The event also saw the rainbow flag raised above Stormont – the first time Northern Ireland’s parliament buildings have made the move.