The school disputes most of the claims | Photo: Unsplash/Nathaniel Shuman

An Oregon school allegedly forced an LGBTQ student to read the Bible as punishment. There are also further discrimination allegations after LGBTQ students reported sexual harassment.

The Oregon Department of Education (ODE) looked into the reported incidents. Mark Mayer, the complaint and appeals coordinator for ODE, wrote in a 6 March letter: ‘In conclusion, the department finds that discrimination on the basis of sex and sexual orientation may have occurred.’

GSN confirmed that the American Civil Liberties Union of Oregon is also involved in the case. They will be releasing more details soon.

The district released a statement to The World, saying they participated in the investigation and discrimination ‘may have occurred’. However, they ‘dispute many of ODE’s preliminary findings’. 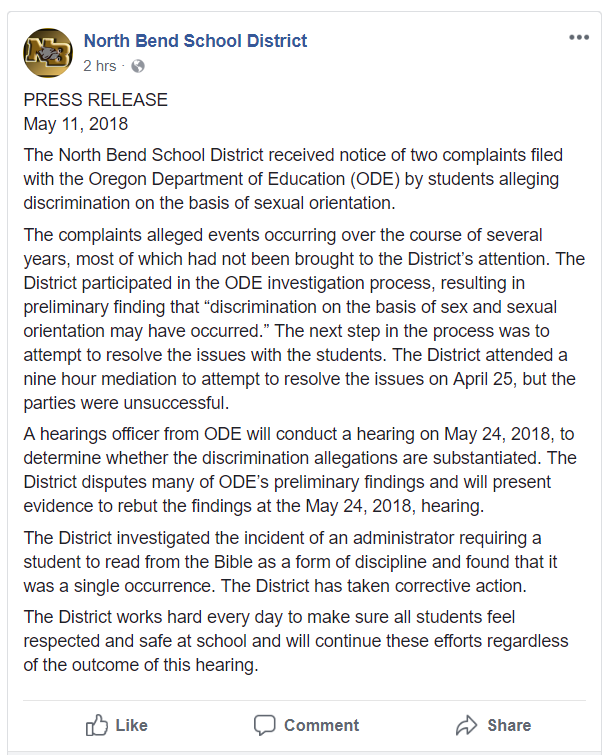 So what actually happened?

The ODE’s letter detailed the allegations.

In one case, an administrator forced a student to read a passage from the Bible as punishment. The administrator and their supervisor reportedly confirmed this to the ODE.

They also found evidence the student’s sexuality dictated the punishment.

The ODE warned in their letter this compromised anti-discrimination laws, as well as the First Amendment’s ban of establishment of religion.

Other students also alleged the school failed to investigate and address sexual harassment. One time, a same-sex couple was holding hands in the parking lot when another student drove by and yelled out ‘faggots’.

They also said the Bible punishment made them avoid reporting any problems.

In another instance, a teacher allegedly compared same-sex marriage to marrying a dog.

There is now a hearing scheduled for 24 May to determine if the school district failed state and federal anti-discrimination laws.