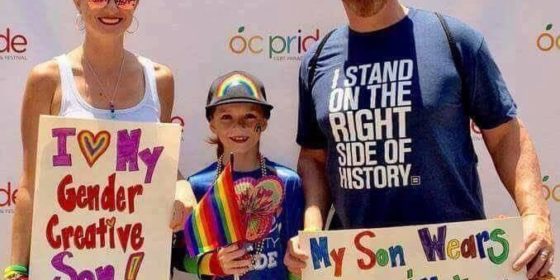 The parents of the ‘gender-creative’ son that actor James Woods criticized recently on Twitter are speaking out.

Lori and Matt Duron live in Orange County, California. They are the parents of 10-year-old C.J. Duron, who they say began showing signs of gender nonconformity at age three and started referring to himself as gender nonconforming at age five. When he was eight, C.J. began identifying himself as a member of the LGBTI community.

In an interview with the Huffington Post Queer Voices, Lori Duron said, ‘I have no idea how we got on James Woods’ radar; he certainly wasn’t on ours. I never expected to get mom-shamed by James Woods.’

On 10 July, Woods tweeted a photo of the Durons with their son at the Orange County LGBT Pride festival held on 24 June in Santa Ana, California.

In the picture, Lori was holding a sign reading ‘I ❤my gender creative son!’ while Matt had a sign, ‘My son wears dresses and makeup . . . Get over it!’

Woods responded in his tweet, ‘This is sweet. Wait until this poor kid grows up, realizes what you’ve done, and stuffs both of you dismembered into a freezer in the garage.’ 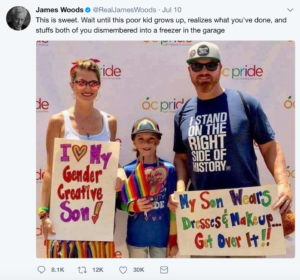 Lori was up late, checking Facebook when she discovered a friend had forwarded the tweet by Woods.

‘I couldn’t quite make sense of his words in conjunction with the picture of us at Pride,’ Lori said. ‘Like, my brain couldn’t register that James Woods ― a somewhat public figure ― was saying that my sweet, happy, harmless 10-year-old son will eventually kill us, dismember us and stuff us in the freezer.’

Support from friends has been swift and constant. Many got on Twitter to criticize Woods.

Among them was actor Neil Patrick Harris who tweeted, ‘Utterly ignorant and classless, Mr. Woods. I’m friends with this family. You know not of what you speak, and should be ashamed of yourself.’

‘As a parent, when someone comes to your child’s defense, the positive emotion is overwhelming,’ Lori said. ‘With Neil being who he is and having the audience he does, that positive emotion was multiplied.’

The Durons also got support from many local LGBTI groups as well as national groups like HRC (Human Rights Campaign) and PFLAG (Parents and Friends of Lesbians and Gays).

‘We’ve been in constant communication with the HRC since the tweet,’ Lori said. ‘I’ve seen firsthand how quickly and powerfully HRC can mobilize to provide support, a listening ear and sound advice. It’s amazing.’

Lori is no novice at being in the spotlight regarding C.J. In 2011, she began writing a blog about raising her gender nonconforming son, Raising My Rainbow.

In 2013, she authored, Raising My Rainbow: Adventures in Raising a Fabulous, Gender Creative Son, an award-winning book based on her blog.

She’s aware that negative attention and hate mail go with the territory, but reports the amount of gratitude, love and support they get has always eclipsed the negative.

Nonetheless, she follows a strict ‘Never Read the Comments’ policy. However, she reports that her hate mail has increased sharply since Donald Trump took office.

Both Lori and Matt say they have evolved over the years and have learned to rise above the criticism, even though it is not always easy. They recognize others may not be on that same journey toward enlightenment.

‘Woods’ tweet definitely highlights the fact that there is work left for me to do,’ said Lori. ‘There is still education that has to take place and empathy to inspire. It also shows the kind of people and thinking we need to protect my son (and kids like him) from. People who think like Woods are the danger to my son; not me.’

Meanwhile Matt is determined to help his son and make the world a better place for him.

‘The statistics for LGBTQ youth are troubling: self-harm, addiction, depression, unsafe sexual behaviors, etc.,’ said Matt. ‘I will not allow those statistics to be my son’s statistics.’

Matt has heard too many heart-breaking stories from LGBTI adults, taking about their troubled childhoods and parents who were not supportive or understanding. Matt wants something better for C.J.

‘I’m a dedicated dad who isn’t afraid and will always speak up,’ Matt said. ‘James Woods isn’t going to change that or the way I father.’